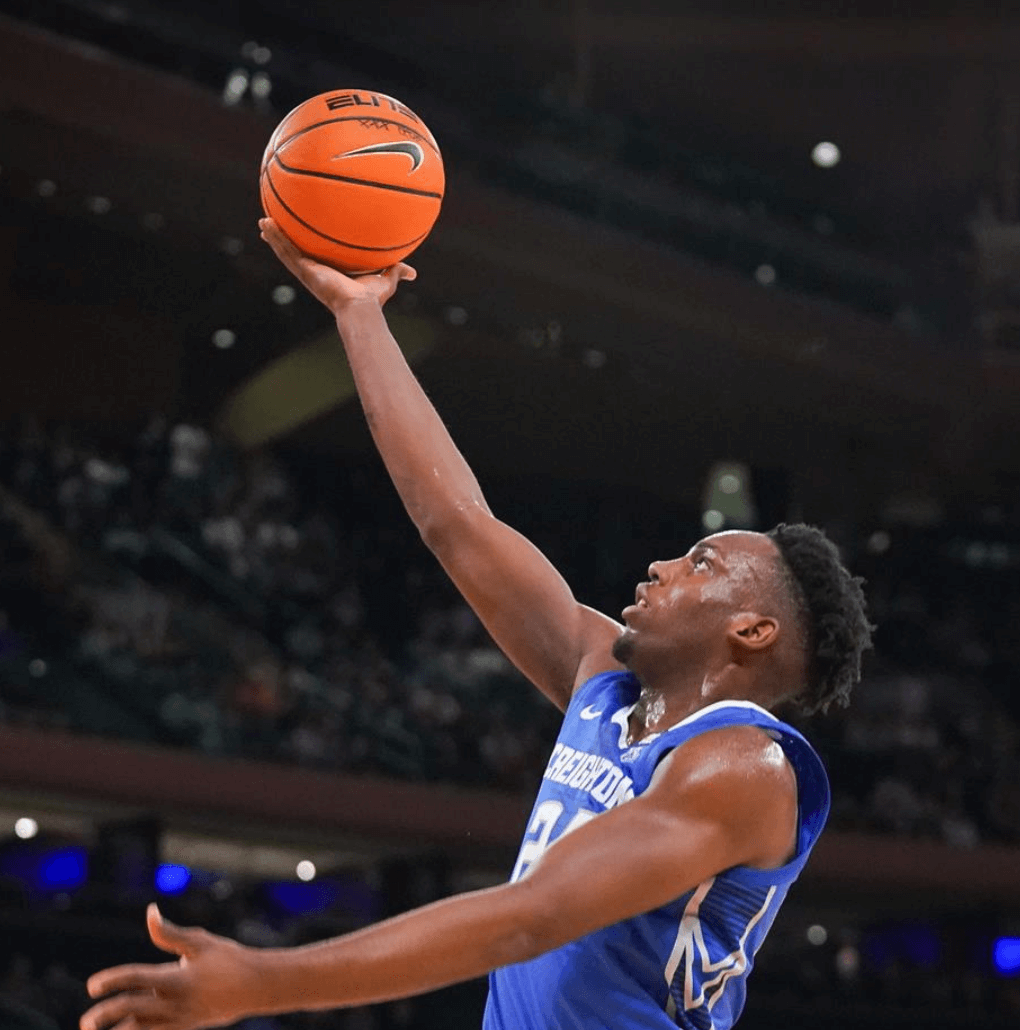 March Madness never fails to bring suspense, drama and break-out draft prospects and this year has been no different. Over the first weekend of the NCAA Tournament we’ve seen a number of huge performances that have introduced draft prospects to a national audience and lifted the draft stock of a few intriguing freshmen. Here’s a look at a few of players who are shinning bright in March:

Arthur Kaluma – PF – Creighton – Kaluma had a monster 24 point, 12 rebound game against Kansas and showed the physical profile and emerging skill set that gets NBA scouts hot and bothered. He’s a 6-7 bull of an athlete who has a thick build and a lot of power, kind of like a young OG Anunoby or a longer Jae Crowder. He fits the mold of a modern power forward who can make plays out of the P&R, can handle and create his own offense and who can defend the full court. He’ll have to add a meaningful 3pt shot to have a big impact in the league but his form isn’t broken and he shoots it with confidence (he hit four 3’s against Kansas). He’s not a polished player but he’s got the type of athletic profile that NBA teams covet. The draft is about upside, after all. It would be awesome to see Kaluma stay for a second season at Creighton but if he decides to declare this year it’s easy to see him rising into the mid first round.

Blake Wesley – SG – Notre Dame – Wesley has plenty of weaknesses and areas of improvement but he also has the type of blow-by speed and one-on-one scoring ability that can take over a basketball game. His athletic tools are truly special and, even though he’s not an efficient shooter and has a lot of development left to do, it’s easy to see a NBA team targeting him in the mid first round or even the late lottery. This isn’t a very strong draft class and a talent like Wesley is hard to find. He’s another player I’d love to see stay for a second season in school but the allure of being a first round pick will be hard to pass.

Jeremy Sochan – PF – Baylor – Although the Bears lost in a hard fought second round game against UNC Sochan was able to show the nation why he’s considered a likely lottery pick. He showed off his powerful dribble-drive game and ability to finish in the lane. And he showed his elite defense; the ability to guard all over the court and guard any position. This defensive versatility is hugely coveted in the NBA and gives Sochan added value, even if his perimeter shooting remains an area to improve upon.

Bennedict Mathurin – SG – Arizona – Mathurin was already a lottery pick before this tournament run but seeing him step up and make huge plays in the biggest games of the season solidifies his lottery ranking and could have him moving into the top 10 on a lot of draft boards. His gutsy 30-point performance against TCU will go down in Arizona basketball lure as one of the all-time great performances – especially if the Wildcats go on to make the final 4.

Mark Williams – C – Duke – Williams just keeps getting better and better and showing off new elements to his game. He had 5 blocks in each of the first two tourney games and is a player who has a massive impact on the game, even if he’s not scoring the rock. But now Williams is starting to show flashes of post moves, turn-around jumpers and some ability to expand his offense outside of the paint. His trajectory and development curve are pointing in a great direction and he seems to be solidifying himself as a first round pick.

Andrew Nembhard – PG – Gonzaga – Other prospects get more attention but Nembhard is arguably the most important player for Gonzaga. He’s had a great senior season, showing a marked improvement in his outside shooting, which was his biggest weakness coming in. And he’s a consummate team first player and leader who contributes to winning basketball. His monster second round performance against Memphis showed both his intangible value and his improved ability to take over on the offensive end. Nembhard looks like a solid second round pick who could be the ideal backup PG in the league.

Brady Manek – PF – UNC – The sweet shooting 6-9 forward was putting on a masterful performance against Baylor before being ejected for throwing a fierce elbow that leveled Jeremy Sochan. UNC was able to hold on and win in OT, which will give Manek at least one more chance to shine. The Oklahoma transfer has had a solid 5-year college career, making improvements each season and getting to the point of being a possible second round draft pick. He’s not a big time athlete but his outside shooting and basketball smarts will get him a long look.

Trayce Jackson-Davis  – PF – Indiana – Trayce finished the season very strong and will have a tough decision to make, whether to stay for a fourth season at Indiana or take his talents to the NBA (or the G League). His skillset is old school and he has some limitations on the offensive end but his strength, athleticism and energy have a big impact on the game and he can bring value to a NBA team, even if he’s not stroking 3pt shots. There’s nothing wrong with being a high level rebounder and defender, especially if you know your role and play within your limits. He’ll be one of the more interesting evaluations this draft season.