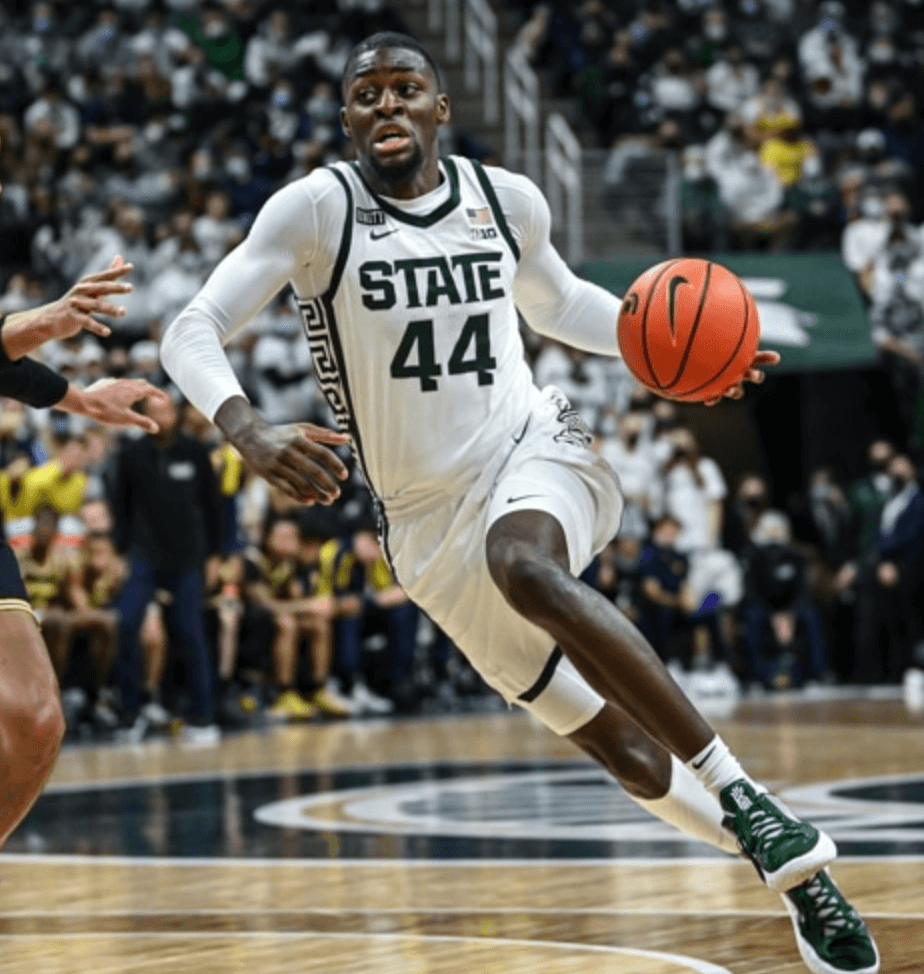 We all want our team to draft a star talent in the first round but sometimes it’s the unheralded second rounders or undrafted guys that really add value to a NBA roster. Here’s a look at a few talented prospects who might not get drafted but should get a long look from NBA teams and possibly work their way up through the G League before landing in the league.

Gabe Brown – SF – Michigan State – I’m a big Gabe Brown fan. The steady 6-8 senior is the consummate 3&D wing who has a NBA level frame and plays a nice all around game. He’s a very good 3pt shooter and an elite level FT shooter. I’d be surprised if his shooting doesn’t translate well to the league. He’s also a high level defender, plays within his role and looks ready to be a solid role player off of a NBA bench. He’s a long and bouncy athlete who definitely looks the part. Brown isn’t listed on most mocks but could rise up boards during draft season, as he has all the tools teams are looking for on the wing.

Keve Aluma – PF – Virginia Tech – Keve is a highly skilled forward with a really smooth game. He’s a great college player who was clearly the best player on his Virginia Tech team but it remains to be seen if his skills will translate to the next level. He’s a skilled shot maker at 6-9 but is best from mid range and in. He can hit the 3 but will have to put in a lot of work in this area to excel at the next level. He’s a smooth athlete but doesn’t have great burst or vertical explosion. He’s got a chance to drafted late second round, or should get a long look from NBA teams as an un-drafted free agent.

Pete Nance – PF/C – Northwestern – A 6-10 senior forward with great bloodlines, Nance could very well find a role in the league like his brother and his dad before them.  He’s got a modern skillset with the ability to stretch the floor (45% from 3 on good volume) and he has great basketball sense and feel for the game. He’s a versatile defender, has good length and brings consistent effort. He’s not going to be a high scorer in the league but could carve out a career as a steady bench big.

Jake LaRavia – SF/PF – Wake Forest – Is Jake LaRavia the next Georges Niang? That would be a great outcome for someone who isn’t guaranteed to get drafted but has a game that fits the modern NBA. The 6-8 junior showed marked improvement across the board this year and is firmly on scouts radar. He’s a solid 3pt shooter hitting 39% from 3 on the season (on 2.3 shots per game) and he projects to continue to improve in this area and become a meaningful floor spacer. At 235lbs he’s got the size and power to hold his own in the paint and the strength to finish through contact. This versatility makes up for some of his athletic shortcomings and allows him to guard in the paint against taller opponents. Whether he’s drafted or not, look for LaRavia to find a NBA team to develop with. He could also decide to return for his senior season and look to improve his draft stock even more.

Andrew Nembhard – PG – Gonzaga – Nembhard is obviously a well-known name who has been on the national stage for 4 seasons but he doesn’t get a lot of draft buzz. He’s not super flashy, he plays a team-first game and doesn’t get a lot of the headlines but he projects as a player who can step in right away and run a second team offense in the NBA, which is a skill that should get him drafted in the second round or have him be a priority free agent signing. Nembhard has the size at 6-4+, has enough athleticism and is a really smart basketball player who is like a coach on the floor. His 3pt shot is much improved (over 36% this season) and his solid shooting form makes you think he can continue to improve and become a knockdown 3pt shooter at the next level. Nembhard won’t be a star in the league but it’s easy to imagine him sticking around for a decade and being part of a lot of winning basketball teams. A deep run in March could give a little boost to his draft stock.

Gabriele Procida – SG – Italy – Procida isn’t a sleeper to NBA scouts but the casual fan might not know his name. He’s a 6-7 shooting guard from Italy who has some really nice NBA traits including a picture perfect 3pt shot which he hits at a high clip and really solid athleticism. Procida is quick in the open court and has no problem playing above the rim and throwing down some nice dunks. He’s got a lot of confidence in his shot and can hit shots on the move or the catch and shoot. He’ll be 20 years old in June and so isn’t the youngest player out there but he’s got a polished skill-set and could be ready to make his mark in the NBA sooner rather than later.

Other Sleepers to Watch