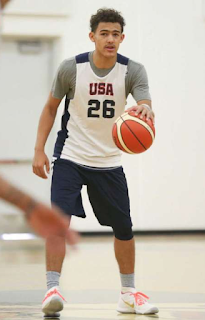 A true point guard with a deft shooting touch and an uncanny feel for the game. Young doesn’t have ideal size or athleticism but he’s a gifted play-maker and pure shooter with unlimited range on his jumper.

Strengths
Young is an insanely smooth player who possess great ball handling skills and a lethal three point shot. He can control the game with his ball handling and draw-and-kick ability. He has excellent court vision and plays like a natural point guard, doing a great job of controlling the flow of the game, drawing the defense and finding his teammates.

Does a great job of pushing the pace and catching the defense off balance. He puts a ton of pressure on the defense with his truly elite combination of shooting and passing.

His shooting ability is about as good as we’ve seen. There are times when it seems like he can’t miss. This shooting ability keeps the defense honest, allowing Young to find driving lanes and make moves to the rim, where he can hit on all sorts of floaters and crafty layups. His all around scoring ability combined with his drive and kick passing ability, makes him a very dangerous in half court sets. He gets his shot within the flow of the offense and can also step up in big moments and take over the game.

His high basketball I.Q. is evident on the defensive end where he plays with great positioning and good fundamentals. He makes up for his lack of size and strength by reading plays quickly and getting good position, and he’s got enough quick-twitch speed to jump the passing lanes to get the steal.

Young is a leader on the court and a true play-maker. The type of player who teammates love to play with.

Weaknesses
Lacks ideal strength/size/speed by NBA standards and will be over-matched physically against many of today’s NBA PGs. His defense is limited to guarding point guards and jumping passing lanes. He’ll get abused in the post early in his career.

Young shoots the ball from a low position, making it easier for the defender to block. Can he get his shot against NBA D? Can he improve his three point shot to the point where it’s a real weapon?

Comparisons
Steph Curry!? Could we be that lucky as basketball fans to have two in the same decade? It’s starting to look that way.