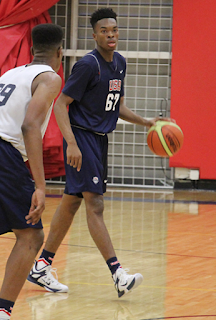 Overview
A big, quick and crafty combo guard who has great handles and superior play-making ability. The Baton Rouge native is staying home and bringing his talents to LSU, as part of a great recruiting class for the Tigers.

Strengths
Has ideal size for the PG position and an NBA body. He’s big, strong and has top level burst and quickness. Athletically he can hold his own against NBA level athletes and he has a chance to become a special player at the PG position.

Smart is very crafty with the ball and has great ball-handling ability. He has a quick first step to blow by defenders and a super quick crossover… breaking ankles on his drives to the basket. He’s at his best when he’s driving and dishing or taking it all the way to the rim and he’s very difficult to stop in the open court.

Uses his size well to shield off defenders and can play with his back to the basket and punish smaller PGs in the lane. His strength is evident in the way he finishes through contact and in his ability to score in the lane against taller defenders.

Weaknesses
His outside shooting is still a work in progress and he needs to improve from three point land, from mid range and with his shot selection. He’s got ok but not great form on his jumper and his release point is a bit too low.

Can be too turnover prone. Needs to do a better job of securing the ball in traffic and not forcing the issue.

Has good but not great point guard instincts and needs to get better at running the offense and making better to decisions with the ball.