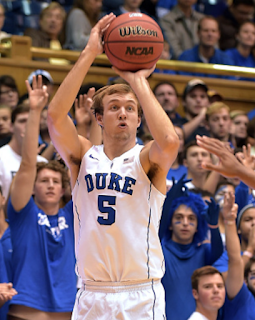 A sweet shooting 2-guard who lacks ideal athleticism but plays a crafty game. Fundamentally sound and efficient player who should have a long career as a role player in the NBA.

Pros
Kennard is a highly efficient player who makes the most out of his abilities and makes the right basketball play. He hits a high percentage from the field, from 3 and from the line. He does his scoring within the flow of the offense, doing a great job of utilizing screens and moving without the ball. He’s a knock down shooter who steps up in the clutch and isn’t afraid to take the big shot.

Kennard has NBA range on his 3 and a compact, smooth release on his shot. He projects as a high level shooter at the next level who will likely be a role player who comes in for instant offense.

He is well built with a solid frame and enough strength to finish through contact.

Not an explosive athlete but plays with crafty quickness and great positioning. A solid team defender who has enough strength to hold his own against most wings.

He’s a great teammate, hard worker and the type of player who adds to the team beyond the box score.

Cons
Although he’s really good at scoring the ball, he doesn’t project as a first or second option in the NBA. He’ll likely be more of a role player than a player you build a franchise around.

Lacks big time athletic ability and is a step slow by NBA standards.

Does most of his scoring from the perimeter and isn’t a great finisher in the lane.

Can he guard NBA 2-guards?

Comparisons
Reminds of Kyle Korver and Wesley Matthews. Or a better Jason Kapono.

Projection: late first to early second round pick in the 2017 or 2018 NBA Draft