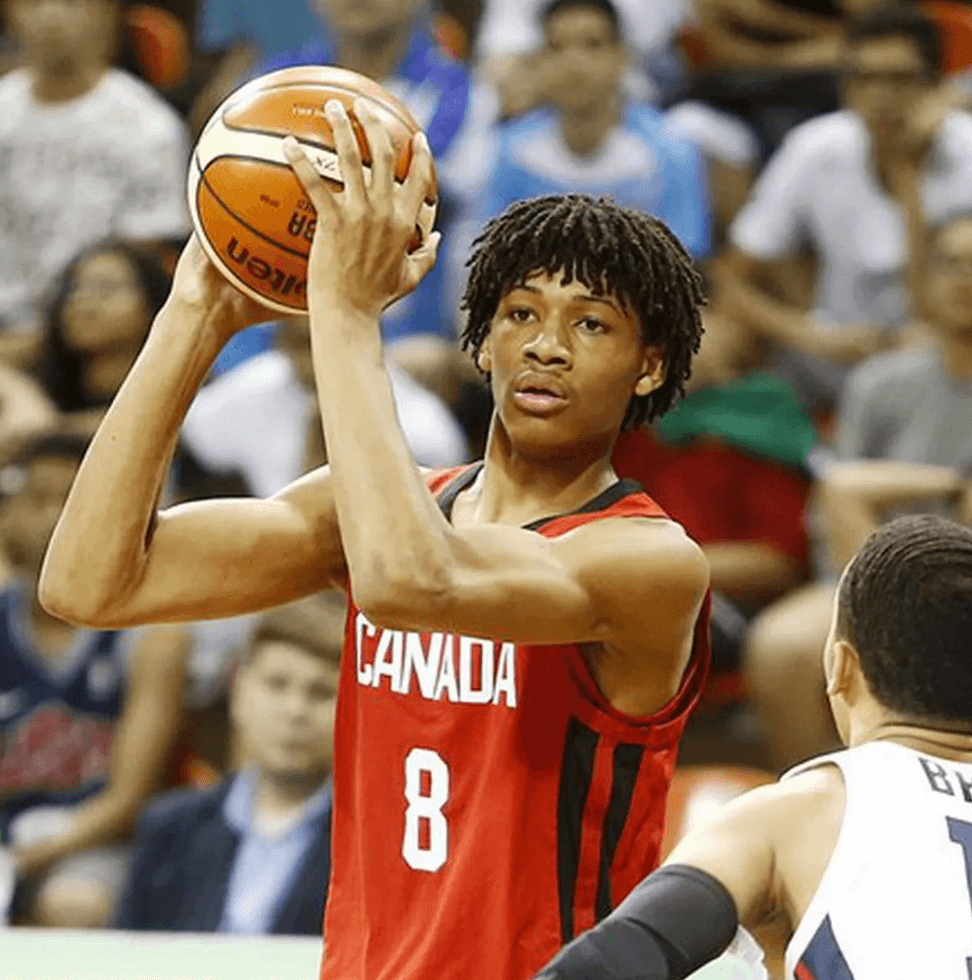 Youth can be overrated when it comes to evaluating NBA prospects.

And older prospects can often be over looked just because they’ve reached the ripe old age of 21 or 22 and are perceived as having less upside to develop.

But, with that said, it’s still important to take age into account when putting together a big board. All other things being equal a 19-year-old prospect is more intriguing than a 22-year-old and will usually be drafted higher.

The highest upside prospects usually take a fast-track to the NBA and get drafted in their teens or as 20 year-olds. But draft history is full of young prospects that bust, while older players drafted later in the draft stick around in the league and shine, developing into starters and All Stars.

Like all aspects of prospect evaluation there’s no one size fits all answer. Drafting is more of an art than a science and prospect age is just one of many important factors for GM’s and scouts to consider.

For your consideration, here are the 13 youngest players in the 2022 NBA Draft along with some thoughts on how their age factors into their draft evaluation.

Yannick Nzosa – C – Unicaja Málaga – Draft Day Age 18.6 – Nzosa had a poor showing this season for Unicaja Málaga in Spain, seeing limited playing time and when he was on the floor he looked a long ways away from being a NBA player. Yes, he’s young and yes he’s athletic but that doesn’t automatically make him a high level prospect. To add to the disappointments, he was prevented from coming over to participate in the NBA Combine, missing out on a chance to lift his draft stock.

If you think back to Clint Capela as a prospect he had some of the same traits but was further along than Nzosa. And it still took Capela 3 or 4 years to find his footing in the league. I’d bet that Nzosa is at least that far away from being NBA ready. A team could take a flyer on him in the late second round but I wouldn’t hold my breath on him contributing to the team that drafts him. This is a case where just because he’s young doesn’t mean he’s got huge upside.

Jalen Duren – C – Memphis – Draft Day Age 18.6 – An interesting fact that I’ve been pointing out all year long is that Jalen Duren is 18 months younger than Chet Holmgren, even though they both are entering the draft after their freshman seasons. If Duren was born 45 days later he wouldn’t even be eligible for this draft. So what can this tell us about his value as a prospect and his likely NBA ceiling?

One way I like to think about it is to imagine Jalen Duren returning to Memphis for another season and a half. How would he look? What new wrinkles would he add to his game? Imagine him adding a consistent mid range jumper, stretching his range out to 3, making even better decisions with the ball (he’s already pretty good) and polishing up his passing ability. How dominant would he be on the defensive end?

Would he then be as valuable of a prospect as Chet or one of the older lottery prospects in this draft, Keegan Murray?

If Duren played in college as a 20 year old he would be unstoppable – he might be right up there with DeAndre Ayton as a prospect – a possible no.1 overall guy (Ayton was nearly 20 years old on his draft day). So in this context, with Duren, I think his youth is important to factor into the equation and gives him added intrigue.

Trevor Keels – SG/SF – Duke – Draft Day Age 18.8 – Keels youth shows up in his inconsistency. He’s built like a bull with a grown-man’s body (although needs to chisel that frame) but still has a ways to go in developing and polishing his game and playing at a consistently high level.

After flirting with returning to Duke for his sophomore season Keels decided to stay in the draft and will probably fall into the second round – but is a nice swing-for-the-fences pick for a team willing to be patient.

I can imagine Keels kicking around in the G League for a season or two developing into a NBA level wing. Getting into peak physical shape will be a priority.

A.J. Griffin – SG/SF – Duke – Draft Day Age 18.8 – Most of the concerns about Griffin Jr. as a prospect stem from his injury history and his apparent lack of the burst we saw him display in high school. These aren’t really age related concerns.

His defensive lapses can be ironed out with more coaching and reps but getting back to top physical form and staying healthy are the main question marks here. Even if Griffin Jr. never gets all the bounce back his elite shooting talents still give him a lot of value (think jumbo Gary Trent Jr.).

Having grown up in a basketball family A.J. is well versed in the nuances of the game. He also showed an impressive ability to play his role and not try to be the man at Duke. Not every player is going to be the star or have the ball in his hands all the time. Knowing your role and doing it well is a sign of maturity – and will help him out a lot early in his career.

Despite the question marks Griffin Jr. should come off the board in the mid to late lottery.

Nikola Jović – SF/PF – Serbia – Draft Day Age 19 – Despite his youth Jović has a lot of experience and a relatively high level of polish to his game. His youth does show up on the defensive end where he’s still figuring things out but some of his defensive limitations are due to his physical profile as much as his lack of understanding. He’s got size but can struggle to hold his own in the post – and he’s got solid athleticism but not enough to effectively switch everything on the perimeter. He could get roasted early in his NBA career.

His offensive game is advanced and mature for a 6-10+ youngster. He’s a natural play-maker who sees the floor and can make all the passes. His shot is coming along nicely and seems to relish being the man on the offensive end.

Getting stronger and more fundamentally sound on defensive will come with age and his offensive traits are more than enough to warrant a mid first round selection.

Jean Montero – PG – Overtime Elite – Draft Day Age 19 – Montero is a guy who can put up numbers and is at his best with the ball in his hands and the freedom to create. But he’s not very efficient and doesn’t have great size or strength, which could make him a bench scorer type of player at the NBA level.

Learning to run an offense and committing to being more of a pass-first player would help his value. As would adding strength to help him defend NBA guards – although he doesn’t seem to have a frame that will fill out a lot.

These limitations and concerns will likely keep Montero out of the first round.

Shaedon Sharpe – SG – Canada – Draft Day Age 19.1 – Sharpe has all the physical tools and the frame to hold his own in the league from day one. But it remains to be seen if he has all of the intangibles to reach his sky-high potential. He’s a soft-spoken kind of guy who doesn’t project as a vocal leader on the floor. And he left a soar taste in the mouth of Kentucky fans this past year with his mixed messages about returning to school.

It’s probably fair to say he has some growing up to do…but he also has all the talent in the world and a chance to be an All Star in the league.

Ousmane Dieng – SF – France – Draft Day Age 19.1 – At the beginning of the season Deing’s youth was on full display as he struggled to hold his own in the NBL. Then he found his footing and his talent started to shine.

He shows promise as a 3pt shooter but still has work to do to get better. He reads the floor well and had a number of highlight reel passes but still needs to develop his decision-making. He’s the type of prospect who shows flashes of ability that makes talent evaluators take notice. Developing his consistency will be key.

Like most 19 year olds he needs to add to his frame and continue to develop his game but the skies the limit. Dieng has all the makings of a top 10 pick.

Jeremy Sochan – PF – Baylor – Draft Day Age 19.1 – Sochan might be young but he’s one tough SOB. He plays with an edge, knows how to get under the skin of his opponents and also has advanced BBIQ.

His biggest weakness right now is his outside shooting, which may or may not come along as he grows up and grows his game. But most wings and bigs who enter the NBA tend to develop as shooters and I’d be willing to bet on him becoming a serviceable floor-spacer in time. His defense, passing and intensity give him a high floor and should lead to him having a long NBA career.

Jabari Smith Jr. – PF – Auburn – Draft Day Age 19.1 – A consensus top 3 pick and possible no.1 overall, Jabari has a level of polish to his game that belies his age. His one major weakness, ball-handling and breaking down defenders with the dribble is something that I can easily imagine him developing in the coming years. It’s easy to forget that he’s a 6-10 teenager. It’s understandable that his ball-handling would be in need of improvement at this stage.

Jabari clearly has high BBIQ and the type of passion and aggression on the court that you hope to see from a potential star player. His defensive intensity, competitive spirit and work ethic help alleviate the minor concerns about his handle and play-making.

Malaki Branham – SG – Ohio State – Draft Day Age 19.1 – Branham plays such a steady, heady game that you’d think he’s an upperclassman. He’s a good but not great athlete who beats you with smarts and skills, not elite burst or bounce.

He’ll get better on the defensive end as he matures but I don’t expect him to be a big time defender or suddenly become an elite athlete. Despite these couple of shortcomings Branham is deserving of a late lottery to mid first round selection and should be a bucket-getter in the NBA.

Kendall Brown – SF – Baylor – Draft Day Age 19.1 – This is one where I think age should really be factored into the evaluation. Brown is an awesome athlete who also has great basketball instincts (passing, reading plays, defending) but just needs to figure things out more on the offensive end, especially with his shooting. I could see him getting steadily better for the next decade and becoming a super valuable high-end role player in the league, possibly even an All Star some day.

His role might be limited early in his career but by his second contract I think he’ll be a super valuable piece to a winning team.

Dominick Barlow – PF – Overtime Elite – Draft Day Age 19.1 – My favorite sleeper prospect in this draft, Barlow has been flying under the radar and has been overlooked by most draft analysts. He’ll probably fall to the second round and will be a nice developmental player for whichever team drafts him.

Barlow has good size, great length and a nice touch on his jumper. He’s a hard worker who has been on a great trajectory as a prospect, going from barely top 100 in his class to being one of the standouts of the Overtime Elite league and now a possible NBA Draft pick.

See where these youngsters land in the latest mock draft.