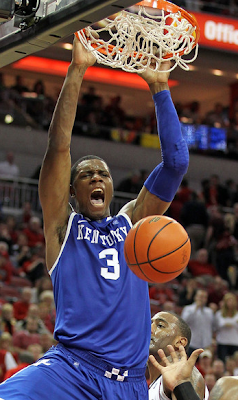 After a great start to his freshman season Jones hit a wall and hasn’t played at the same level since. He still projects as a first rounder but is no longer a lock to go in the lottery.

Jones is a very versatile athlete who has the height and strength to play in the post and rebound the ball but also has small forward skills and can play on the wing. A natural scorer who can really fill it up once he gets going. Has a nice mid-range game and can score in the low post as well.

Good shot blocker (1.9/game) and active defender. Very solid rebounder on both ends of the floor. Explosive athlete with a very quick first step. Very difficult for traditional power forwards to guard due to his quickness and agility. Good competitor on the boards and attacks the glass well. Seems to really understand the game and make good decisions with the ball, although he does need to cut down on the turnovers.

A bit of a tweener who doesn’t seem to have a natural position. A bit undersized as a power forward and doesn’t have the handle (yet) of a small forward. Shoots the ball flat-footed, although he is becoming an accurate college three point shooter. Doesn’t project as a great NBA 3 point shooter and really needs to improve his free throw shooting.

Doesn’t always hustle back on defense and needs to dedicate himself to that area of the game. Sometimes gets carried away trying to do too much, either dribbling or making the fancy pass. Has showed a lack of maturity in his second season and needs to show a better attitude to be considered a top prospect.