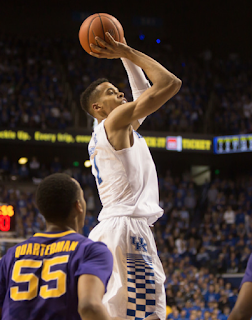 Skal has great length and an intriguing mix of shot blocking ability and shooting touch. The minutes and the production haven’t been there but the upside is obvious.

Pros
He’s a very smooth offensive player who can score inside with his impressive length and shoot it from outside with an unblockable mid range J. His shooting touch might be his greatest strength.

His post up game shows flashes of dominance but has also been inconsistent. His length gives him a huge advantage in the post and he’s got really good touch around the rim and on an array of baby hook shots and step backs. Developing NBA 3 point range.

He defends the lane well and is a good help defender who shows good timing on weak side blocks. Can really play above the rim and is a force in the defensive paint.

Changes ends well, has solid coordination and all the physical tools you look for in a high level prospect.

Cons
Will need to develop the fire, intensity and understanding of the game that makes good players great. Seems to disappear too often and lacks consistency, focus and passion.

Lacks strength and will probably never be a bruiser inside. Gets pushed around in the paint and isn’t a great one on one post defender, despite his height and length.

Too foul prone and doesn’t play with great control or smarts.

Projection: lottery to mid first round pick in the 2016 NBA Draft