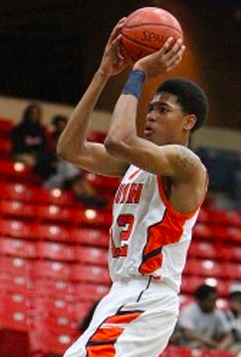 A true above the rim player who can also fill it up from outside. A high-ceiling prospect who projects as a lottery pick.

Pros
An out of this world athlete who elevates higher than anyone on the floor. Has long arms and can get above the rim without much effort. Very smooth in the open court and with the ball in his hands (lefty).

Has point forward skills and supreme confidence with the dribble. Sees the floor very well and stays one step ahead of the play.  A polished ball handler.

Oubre is an explosive scorer who gets to the rack like a young Tracy McGrady.  Has a scorers instinct and a nose for the ball. Goes after offensive rebounds with a lot of aggression and should throw down some nasty dunks during his career.

Cons
Doesn’t elevate much on his deep jumper and needs to hasten his release and improve his accuracy.

Can get sloppy with the dribble and needs to get better at driving with his right hand.