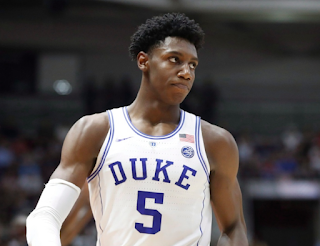 Overview
A high level prospect who has all the traits to be an All Star at the NBA level. Barrett is a physically gifted and multi-talented Canadian-born small forward who has great work ethic and loads of natural talent.

There are some concerns about his shooting ability and shot selection and that maybe he’s just another Andrew Wiggins but what separates him from Wiggins and the rest is that he’s an alpha dog who wills himself to be great. Barrett has that determination that makes good players into great players.

He’s a near lock to be a top 5 draft pick in June.

Strengths
Barrett stands 6-7 with broad shoulders, good strength and superior coordination. Athletically he’s head and shoulders above the competition and he can overpower and/or blow-by just about any defender that gets in his way. His physical gifts allow him to play anywhere on the floor and guard multiple positions.

Barrett is becoming a complete offensive player with a good looking shot (lefty), nice handles and high level passing ability. He’s developing point-forward skills and is great in transition, both as a ball handler and at filling the lane. He dribbles with his head up and has a great feel for the game and excellent court vision.

Barrett does a nice job of drawing contact on his drives to the rim and has the strength and creativity to finish the old fashioned three point play. He also has a really nice mid range game, showing an array of floaters and pull up jumpers.

He’s a good pick and roll ball handler who has a natural feel for spacing and hitting cutters. He’s a 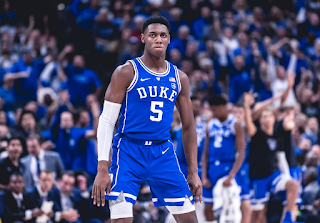 good enough shooter that you need to guard him to the three point line, which opens up his great dribble-drive game.

Defensively he can guard 4 positions and he plays with intensity. He is quick to react to the ball and uses his length well to pester the ball handler and play the passing lanes.

A competitor who steps up in big moments, Barrett is at his best with the game on the line or when facing a high level of competition. He seems to have that it factor that separates the great players from the good players.

Weaknesses
Barrett scores a ton of points but it takes him a lot of shots to get there. He often forces the issue, driving the ball into traffic and putting up wild shot and layup attempts.

Hasn’t shot the ball well at Duke, hitting about 30% from downtown and under 70% from the FT line.

His shot selection has been questionable.

Comparisons
A Tracy McGrady type with some Grant Hill in his game.
An angry Andrew Wiggins.
Will Barton??