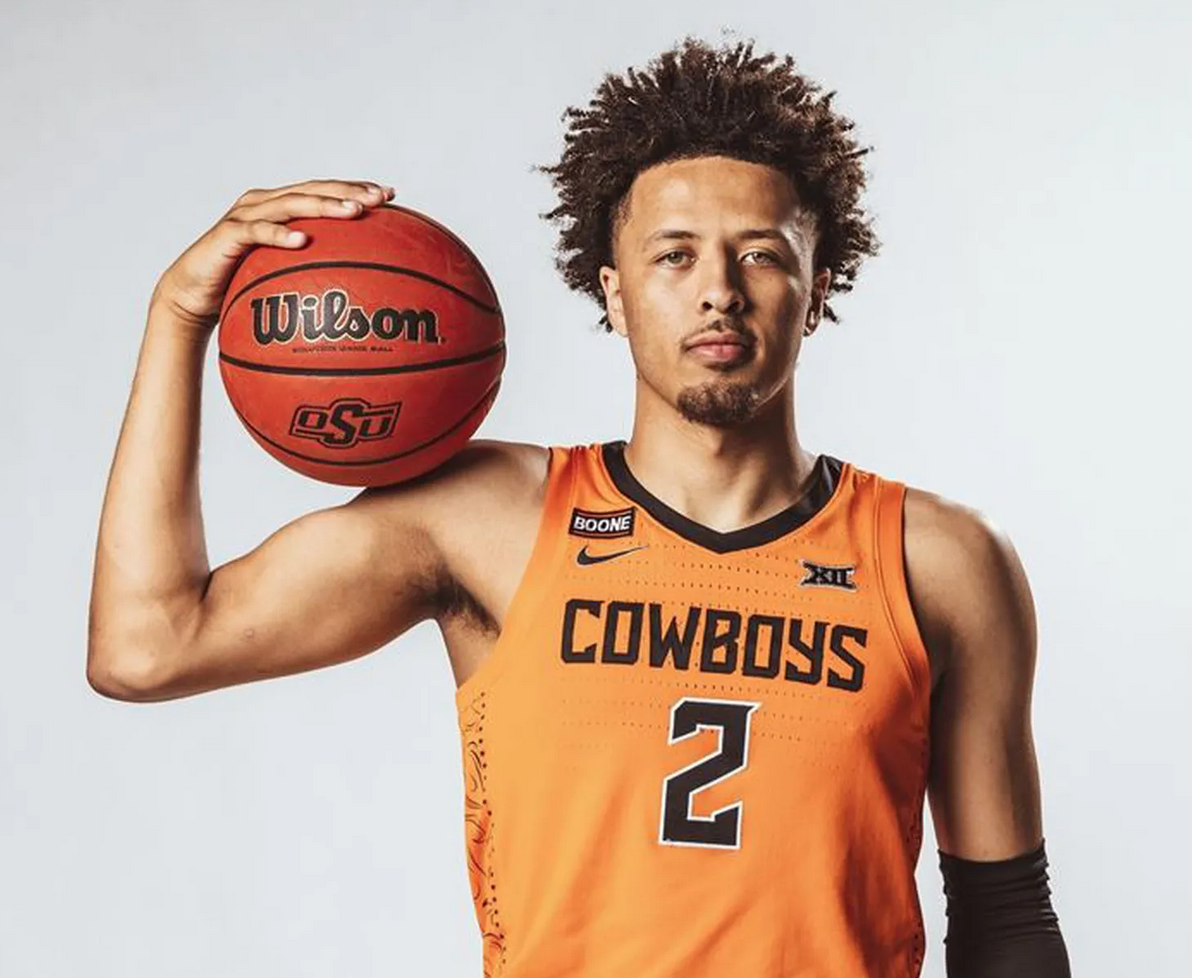 1 – The Detroit Pistons struck gold on Tuesday night, winning the NBA Draft Lottery and gaining the right to select jumbo point guard Cade Cunningham out of Oklahoma State. There are a few other worthy prospects in this draft who could potentially be no.1 overall picks in weaker drafts but with Cade on the board the choice will be simple. The Pistons drafted a point guard last year in Killian Hayes but that won’t be enough to keep them from making the right and obvious choice this year, and selecting Cade. These two could complement each other in the backcourt and there will be plenty of touches to go around.You can never have too much ball handling and passing on the floor. After a few awful seasons the Pistons are on the rise and will be able to put a talented young line up on the floor with Cade, Killian, Saddiq Bey, Jeremy Grant and Isaiah Stewart. This young core will take some time to gel and grow together but a return to the playoffs is in their future. Other options here: None

2 – The Houston Rockets landed the no.2 overall pick and here’s where the intrigue and suspense starts. Jalen Green and Evan Mobley are widely considered the best prospects on the board, including by yours truly, and it will be a really tough choice for the Rockets. Green could provide some of the perimeter scoring punch that the franchise lost when they traded away James Harden, while Mobley is a potentially generational big man with a silky smooth game and an elite skill level for a 7-footer. For now we have Mobley mocked no.2 to the Rockets but by a slim margin. Mobley flashes an elite skill set, can hit the outside shot and has excellent decision making for a young big. The Rockets need to go best player available here. Christian Wood is an emerging talent who plays a similar role as Mobley but the two can surely coexist. Any way you shake it, the Rockets will have a really tough choice between two potential superstar players at no.2. Other options here: Jalen Green, Jalen Suggs

3- The Cleveland Cavaliers jumped up two spots to land the no.3 overall pick and will likely select the remaining player left on the board between Green and Mobley. There are some reports that this pick could be on the trade block but they’d need to receive a dynamite package to convince them to pass on one of these young talents. The Cavs have some nice pieces in place, especially at the guard position with Sexland, and at the SF position with Isaac Okoro. Either Mobley or Green would fit in just fine. Mobley would be a complete no-brainer, filling a position of need and being the clear cut best player on the board, but if it’s Green that falls to no.3, their will be plenty of room to plug him in with the young guards (or move one of them in a trade). Green is a dynamic athlete and potentially the best scorer in the draft, with the ability to get flaming hot from outside. He’s got an explosive first step and attacks the rim with a vengeance. Other options here: Evan Mobley

4 – The Toronto Raptors made the biggest move up on lottery night, jumping from 7 to 4 and positioning themselves to select one of the elite talents in this class. Scottie Barnes isn’t ranked in the top 5 on many (internet) draft boards but he’s a special talent who fits the mold of how the Raptors draft and build their franchise. Barnes is an absolute menace on defense, able to guard 1 through 4 and bringing an intensity level that rubs off on his teammates. He’s a gifted ball handler and passer who is like a point guard stuck in a power forwards body. He can penetrate the lane and might be the best in this draft class at finding shooters off the dribble drive. Scottie measured with a massive 7-2 3/4 wingspan at the combine and this length really shows up on the court. He rebounds the ball well and can score at the rim with barely any jump. He’s not only got the great length but has quick hands as well, making him a nightmare on defense. The Raptors have Pascal and OG at the forward spots but Scottie might be too talented to pass up. Other options here: Jalen Suggs, Jonathan Kuminga

5 – The Orlando Magic fall a couple spots but still land in position to draft one of the presumptive top 6 special talents in this class. Suggs will be very tempting but with Cole, RJ and Markelle at guard the Magic could look for the high upside Jonathan Kuminga here. Kuminga is the type of big wing that is highly coveted in today’s NBA. He’s built like a tank with a NBA ready body. His outside game, shooting and dribbling, are unpolished but he flashes big time scoring ability and will develop into a 3 level scorer. He’s a dynamic athlete going to the rim, can score in the low and mid post and has decent vision and passing ability. 3pt shooting will be his swing skill and he could be a few years away from being a high level 3pt sniper but the rest of his game is pro-ready. In another scenario, if Suggs goes no.4 to the Raptors, it could be Scottie Barnes landing in Orlando, giving the team a versatile play-maker and elite defender who can guard 1-4. Other options here: Jalen Suggs, Scottie Barnes

6 – The Oklahoma City Thunder slide two spots to no.6, which might be disappointing but they’ll still be able to draft one of the super 6 prospects. One of Kuminga and Barnes seem likely to be on the board here but in this mock draft it’s Jalen Suggs who falls to no.6. These rankings could change but if Suggs does fall the Thunder should waste no time adding the Gonzaga star combo guard to line-up next to Shai Gilgeous-Alexander. Suggs brings in an intensity and passion to the court that will help turn around the rebuilding Thunder and bring them back into playoff contention. He’s a pro-ready player who has all the makings of becoming an All Star a few years down the road. The fit next to SGA is really intriguing and would give the Thunder a strong and versatile backcourt with two players who play the game the right way and play both ends of the floor. If Scottie or Kuminga fall here, both would be nice additions as well. The top 6 prospects seem like a lock, it’s just a matter of seeing in which order they get drafted. Other options here: Scottie Barnes, Jonathan Kuminga

7 – The Golden State Warriors are jumping with joy, even after falling one spot in the lottery. This pick, originally belonging to the Timberwolves would have gone back to Minnesota if it had landed in the top 3. At no.7 the Warriors will have a ton of options and this is where the draft really opens up and gets interesting. The options at no.7 include Mosses Moody, the big sharp-shooting guard from Arkansas, Turkish big man Alperen Sengün, UConn’s James Bouknight and Josh Giddey, the 6-8 point guard sensation from Australia, who would be a really interesting selection. Giddey is an elite passer with extra-sensory vision (he led the NBL in assists as an 18 year old) and would fit seamlessly into the Warriors pass-happy offense. He’s a high upside play who could pay off big down the road, while also giving the team valuable minutes from the jump. His great size and other-worldly feel for the game will make him hard to pass up in the mid lottery. Last year the Warriors passed on LaMelo, who would have added a whole new dimension to the team. Giddey probably isn’t as gifted as LaMelo but he’s built in the same mold and would be really fun to watch on this Warriors team. Other options here: James Bouknight, Mosses Moody, Keon Johnson

A lot can change between now and July 29th so stay tuned for updates. Often, during the weeks leading up to the draft, new information, rumors, smoke screens and bits of intel come to light, which could shake up these projections.