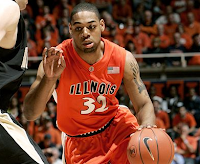 Demetri McCamey and Jereme Richmond entered the 2011 draft process with high hopes. McCamey, a senior, had run the point for the Fighting Illini for 4 years and at times looked like a star in the making. I had him listed in the first round of my mock draft until this past season.

Jereme Richmond entered the draft after just one season at Illinois in which the 6,8 forward had a few strong games but never fully found his footing. I had him projected as a second round selection based on his future potential but that future now looks very uncertain. 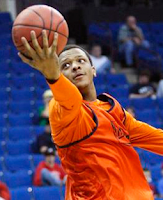 The whispers in NBA draft circles questioned McCamey’s attitude and commitment to the game.  He was rumored to be out of shape and lacking the mental make up to excel at the next level.  Jereme Richmond was also rumored to have attitude problems and this might have kept NBA teams from taking a chance on the talented young forward.

Both players will get a chance to show their skills, either in Europe or the NBDL and could have a chance to make it to the NBA. But for now, what looked like a whole lot of talent and potential turned out to be nothing but noise.