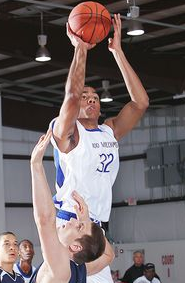 An offensive minded forward, McAdoo can score in the paint or float around the perimeter and nail jumpers. Highly rated out of high school, he has failed to live up to the hype and looks unlikely to be a difference maker at the next level.

Pros
A smooth shooting forward with good size on the perimeter. McAdoo can get hot from outside and has good accuracy from mid range.

Active player who is not afraid to mix it up underneath. Has good length and intriguing skill set.

He seems to have lost all confidence in his game and is really struggling shooting the ball.

His athleticism is less than expected and he often looks clumsy and out of synch on the floor.

Not a true back to the basket power forward and not a bruiser inside. Will likely develop better back to the basket moves over the years but for now he settles for jumpers to often.  A bit of a tweener between a wing and a post player.

Projection: Possible second round pick in the 2014 NBA Draft