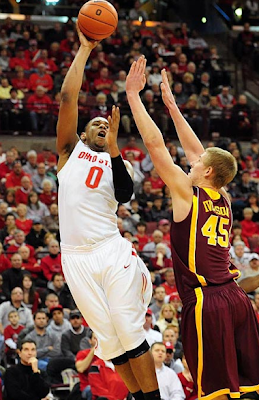 Sullinger came out of the gates fast last season and was an early candidate for NCAA player of the year. Most of us thought he would enter the draft but, like many other star players, he decided to return to school rather than face the chance of an NBA lockout. His Sophomore campaign has had some ups and downs but he still projects as a surefire lottery pick this year.

An absolute bull on the low block (6,9 – 280 pounds) who gets position well and bullies his way to the rim. Has great hands and a soft touch around the basket and is a true low post scoring threat. Very capable of hitting outside jumpers and has nice form on his shot.

A great rebounder who out muscles and out works opponents. Uses his strength well to defend the lane and clean the glass. A leader on the floor and a team first player.

Not a great shot blocker and not a high jumper. Needs to work hard to get into top shape. A below the rim player who might struggle against the bigger, faster, stronger NBA players. Is already close to his ceiling as a player.