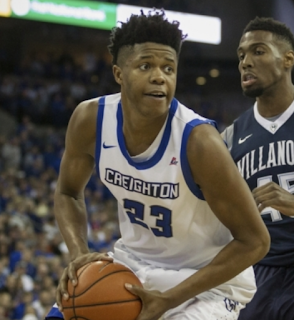 A big physical presence with excellent athleticism for a center and a versatile offensive game.

Pros
Patton is developing into a high level center prospect thanks to his great size and mobility, along with an intriguing offensive game. At 7 feet tall he not only impacts the game in the lane but can step out and hit the three point shot and can make plays in transition. He has a smooth overhead release that is difficult to block, and he hits a high percentage of his shots.

One of his greatest strengths is his ability to run the floor and get buckets in the transition game. He also scores well in half court sets. He can burst to the rim off the pick and roll or score in iso situations, either facing up or with his back to the basket.

His interior defense and rebounding ability make him a valuable commodity, as he can impact the game without needing the ball in his hands a lot. He does a nice job of staying vertical on defense and he changes a lot of shots in the lane with his length.

Patton moves really well for a 7 footer, showing a quick burst and good coordination. He changes ends very well and shows off his quick first step with dribble-drives to the hoop. He has a frame that can add more muscle and he has the size and strength to hold is own against NBA centers.

Cons
Patton is still very raw, especially offensively. His outside shot is inconsistent and he is a very poor free throw shooter, hitting below 60% from the line.

He can seem a bit timid at times and doesn’t always attack rebounds or go hard after loose balls.
Needs to do a better job of protecting the ball and keeping it high.

Still learning the finer points of the game and figuring out just how good he can be.

Comparisons
In body type, Patton lies somewhere on the spectrum between Karl-Anthony Towns and Patrick O’Bryant. He’s certainly not as good as KAT and hopefully much better than O’Bryant.

His skill set is reminiscent of Chris Kaman (although he runs the floor better than Kaman) and LaMarcus Aldridge. He’s got big time potential – and bust potential as well.