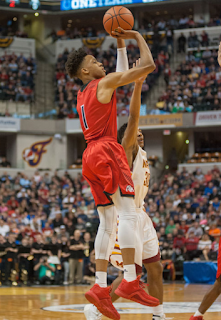 Overview
Langford is a long and rangy SG prospect who is a smooth athlete and talented scorer from three levels. His commitment to Indiana gives the program a marquee name to build around, at least for one year, since Langford projects as a possible one and done prospect, who could be a lottery selection in 2019.

Strengths
Has great size for the SG position at 6-6 with long arms and a frame that will fill out as he matures. He glides up and down the court and makes the game look effortless. A natural scorer, Langford can hit shots from anywhere on the court and shows good form on his jumper. He does a nice job of moving without the ball, coming off screens or making back-cuts to the rim. Runs the baseline well.

Has the size to shoot over most defenders and can hit on fade away jumpers and quick step backs. Has deep range on his three point shot and projects as a high level NBA 3 point threat.

Plays with his head up and is a willing passer who sees the floor well.

Langford shows a good commitment to playing defense and is a fundamentally sound defender who plays with great positioning and discipline. Uses his length well to challenge shots on the perimeter and gets a good amount of blocks for a SG.

Weaknesses
Langford is not a truly explosive athlete and he’s probably closer to KCP than to D. Wade. His lack of elite lift makes it tougher to score in the lane, and will be especially difficult once he’s going up against NBA size/length.

Needs to work on his body and will out his frame with muscle.

Isn’t a very efficient shooter from 3 or from the FT line.