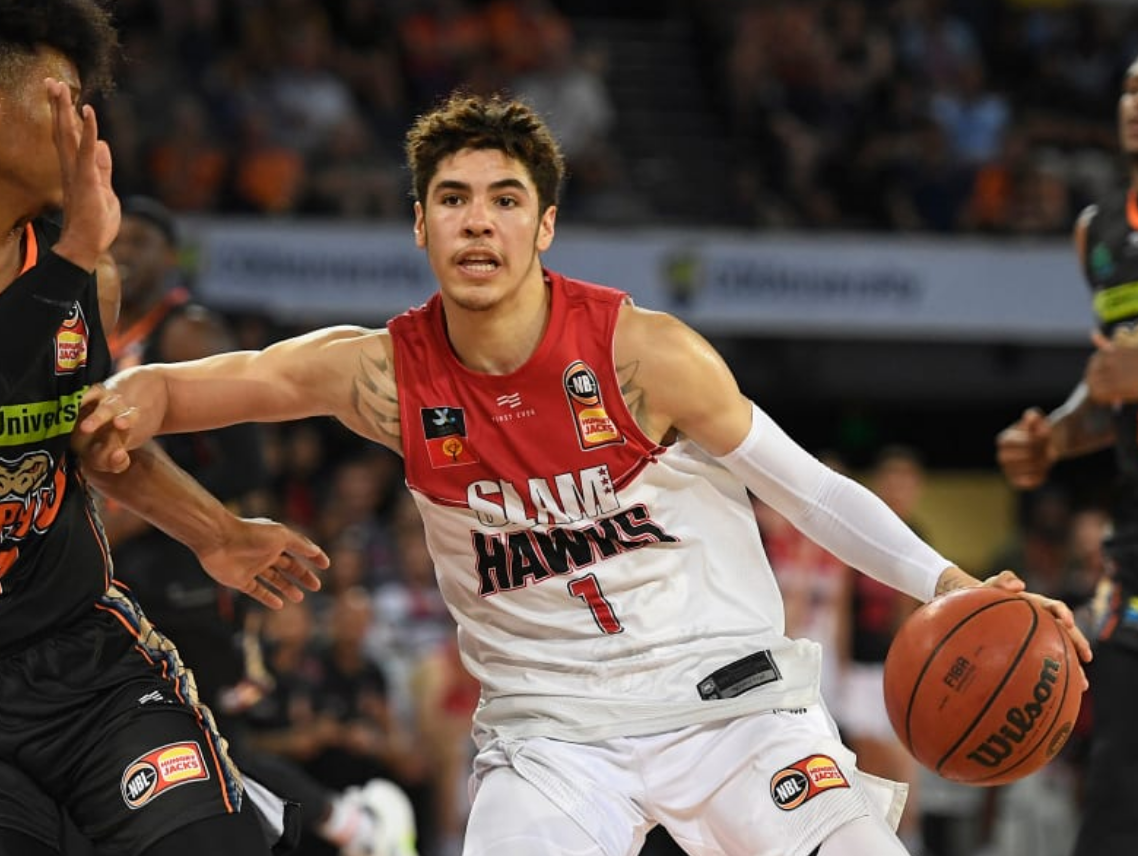 By now even the most casual NBA Draft fan knows the name LaMelo Ball – and knows that he’s a unique player with a ton of talent and some obvious flaws as well. But is he worth the risk of a top 3 pick in this draft? Let’s take a look at some of his strengths and weaknesses along with an assessment of where he should land in this draft.

LaMelo has been a sensation in the prep hoops scene since his freshman season at Chino Hills. In those days the hype seemed to be way ahead of his actual NBA prospects. He was a high scoring 3pt bomber and cherry-picking offensive player who seemed to be allergic to defense (he often barely crossed half court on defensive possessions and instead looked to benefit from Lonzo’s great outlet passes, which helped the younger Ball brother get lots of easy baskets).

But a growth spurt turned the once undersized and physically over-matched Melo into a 6-8 point guard who’s plus positional size has become a major selling point. Even in those past years when he was still about 6-2 his uncanny feel for the game was obvious. He is, and has always been, a great ball-handler and passer but that’s only part of the story. LaMelo doesn’t just have tight handles. He’s got something much harder to teach: a feel and a rhythm to his game that is part talent, part hard work and practice and part art form that only the great ones inherently have.

You can’t teach this type of rhythm. You can give an artist all the tools of the trade but you can’t inspire the artwork that flows from their hands.

LaMelo has an ability to shift his defender and shift the entire defense with his dribble. He doesn’t have the quickest first step and yet he can blow by defenders and warp the defense with his ability to get into the lane. He has a uniquely special ability to make the one-handed pass off a live dribble and he makes finding his teammates look like an effortless exercise in offensive play-making.

He’s developed into a talented pick-and-roll ball handler who makes (mostly) good decisions and excels at setting teammates up for open shots. You can imagine him playing with a high level lob threat in the NBA to form a lethal offensive duo.

LaMelo’s uncanny feel for the game also shows up with his ability to hit runners and floaters. His creative layups and soft touch aren’t just effective in scoring the ball, they hint at something more. The long-range floaters that he attempts and often makes speak to a creative instinct that defies the normal traditions of shot-selection (yes, his shot selection is questionable, more on that below). These shots show the artist in his truest form – unconscious of boundaries, unconstrained by expectations, free to express a truth that the rest of us don’t yet know.

But, as with every player making the jump to the NBA, it remains to be seen if the speed, size and toughness of the highest level of basketball will dilute his genius, muddy his art-form and diminish his creative flow.

We’ve seen it before: young players flashing elite talent only to face a rude awakening when confronted by NBA exceptionalism.

LaMelo faces at least three major challenges in his adjustment to NBA life. First, his average foot speed and athleticism will stand out more at this level of play. His size is a plus but won’t be wholly unique on a court filled with the best, biggest and baddest players on the planet. LaMelo is thin in his lower body, lacks overall strength, doesn’t have good vertical burst and has average lateral agility.

Second, the NBA game demands that point guards who lack elite speed need to be world class outside shooters. This is an area of concern for LaMelo. Not that he doesn’t show some promise but it’s also clear that he has a long way to go as a 3pt shooter. The consistency isn’t yet there and his shooting form is unconventional. This, combined with his tendency to jack ill-advised outside shots is a major cause for concern.

One final area that NBA teams will be quick to attack is his on-the-ball defense. There’s little doubt that much of his offensive game will translate, at least to a fair degree but his lack of defense is worrisome. And it’s more than just a lack of intensity. His lack of great speed and his tendency to reach will be exposed. His subpar effort could also carry over to the rest of his team and might alienate his teammates. He’s a terrible pick and roll defender and this will be exposed early and often.

Teams draft players to help win basketball games. But marketing and media attention (selling tickets, jerseys, sponsorships etc.) is a big part of the equation. LaMelo comes in with as much media attention and social media following as any player in memory. He’s a global celebrity who brings the spotlight with him wherever he goes. This isn’t enough of a reason to draft a player in the top 3 but it could help cushion the blow if his talents don’t immediately translate. Money matters and money follows fame.

Every draft pick comes with risk. Whether it’s a player with an elite physical profile or record breaking numbers at the college level, there’s risk. We’ve seen a few “sure things” over the years, from LeBron to Karl-Anthony Towns, to Zion, but there’s no sure-fire player(s) like that in this draft class. All of the top talents in this class have a chance to bust, LaMelo included. So is he worth the risk of a top 3 pick? Is it worth it for a team to turn over the reins to such an unconventional artist?

Sometimes beauty is in the eye of the beholder. Some scouts will say no. Some will say yes. But at the end of the (draft) day LaMelo’s combination of innate basketball genius, offensive upside and massive media following will make it impossible for a general manager at the top of the draft to pass on.

And one last note. The way the NBA game has shifted to a more free-flowing, high scoring style works in LaMelo’s favor. Yes, he’ll be asked to bring better effort on defense and his 3pt shooting will have to improve but his creativity and unstructured play has more chance of success in this era than in the more hard-nosed era’s of the past.

On the evening of October 16th we’ll see which brave franchise takes the plunge and answers “yes”, he’s worth the risk.