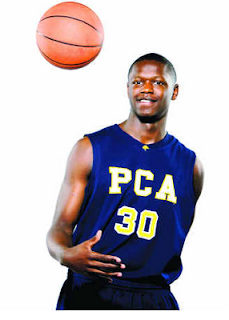 A lot will change between now and the 2014 NBA draft but there are a few players on the horizon that appear to be elite level prospects and deserving of some (way, way) early attention.

First is power forward Julius Randle, a lefty from Dallas Texas. He is a 6,9 player with very good build, muscle and agility. He has a sensational handle for a big fellow and can break defenders down off the dribble and make moves into the lane. His game reminds me of a young Chris Webber but with a better handle. He seems to love the game and should continue to improve in all areas through the rest of his amateur career. He is an early favorite to be the first pick in the 2014 Draft.

Nerlens Noel is the best shot blocking prospect to come along in years. He can erase shots around the rim like a young Dwight Howard, although he is built more like a 6,10 Tyson Chandler. He has great timing on defense and his ability to protect the rim is truly game changing. His offensive skills are a work in progress and will never be the strongest part of his game but his defensive abilities are rare. He needs to add a lot of weight and strength but that should come. He projects as a possible top five pick in 2014.

Jabari Parker from Chicago is an elite level small forward prospect who reminds me of a young Carmelo  Anthony. He is a very skilled offensive player who, at 6,7 has a strong body and a powerful game. His versatility allows him to create matchup problems, with defenders either too slow to keep up or too small to guard him in the post. He has a nice feel for the game and passes the ball well. Could be a top 5 or 10 pick in a few years.

Finally, Euro sensation Mario Hezonja of Croatia is an extremely talented 2 guard prospect. At 16 years old he already stands 6,6 and has a well developed game. He has excellent quickness and can score in the lane or drain deep jumpers. Good explosiveness and can throw down some nasty dunks. Excellent dribble and ability to use his size to protect the ball and see over defenders. Maybe the next big thing out of Europe since Nutella and Ricky Rubio.