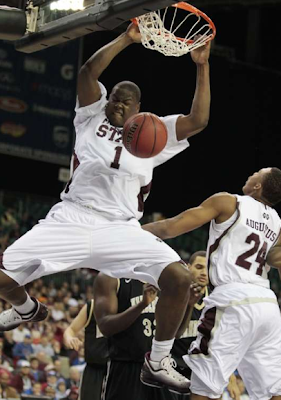 I’ve been a fan of Mississippi State big man Renardo Sidney since I first saw him play about three years ago.  The skills that he has at his size are incredible and his upside, in theory, would seem to be unlimited.  At one point last year I had him listed as a top ten pick in the 2012 Draft and imagined that if he put it all together and played up to his potential he might even go in the top 5.  Boy was I wrong!

After battling weight issues, academic issues, off the court issues (improper benefits) and getting into a well documented fist fight with a teammate I’m ready to give up on the ultra-talented Sidney.  He still has the great skill set and a world of potential but the risks far outweigh the likely rewards and I doubt that any NBA team (if there is an NBA next year) will spend a first round pick on such a volatile player.

It’s a shame.  Rarely, if ever, have I seen a player his size (6,10 and over 300 pounds) move the way he moves.  It is truly amazing to watch his quickness and agility (see video below) and the ball skills he has.  But at some point all the red flags need to be heeded and the warning signs observed.

So with that said, I hereby forever banish Renardo Sidney from my first round projections.  I wish him the best of luck and hope he manages to get things sorted out and put his tremendous talent to good use but as far as my mock draft is concerned, it’s time for me to give up on Renardo Sidney.