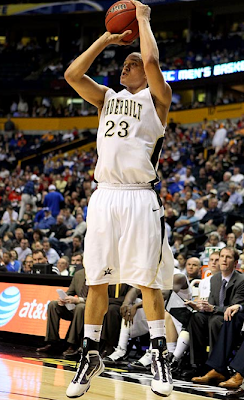 John Jenkins is a feisty shooting guard with a lethal jumper.  He can score in bunches and really heat up from outside.  He is surrounded by talent on a Vanderbilt team.

Great outside shooter with a very quick release on his jumper.  Has picture-perfect form with great elevation on his J.  Can fill it up from outside and carry his team on offense.  Has the type of specialized skill that is highly coveted in the NBA.

Quick hands on defense and can be disruptive in the passing lanes.  Heady player who rarely forces the issue or takes bad shots.  Decent passer and moves the ball well within the offense.

Not an explosive or powerful athlete and could be overmatched against bigger NBA shooting guards.  Not a high flyer or powerful dunker and might be limited to outside shots at the next level.  Will struggle to guard NBA wings.

Projection: mid to late first round pick in the 2012 NBA Draft

–
Join the conversation on Facebook
by NBA Draft Room