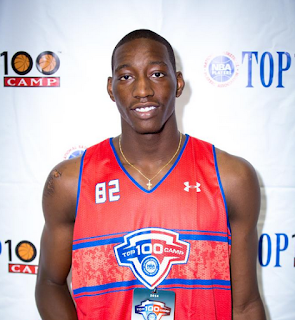 6-10 – PF – Kentucky
“Bam” Adebayo is a big, burly forward who possesses long arms and great hops. He’s a menace as a shot blocker and a highlight waiting to happen on the offensive end.

Pros
Has the physical tools to dominate in the paint. He’s a powerful and quick leaper who has a really good combination of length, strength and quickness. A high level dunker who plays with his head above the rim.

Knows his role as a post player and enforcer and doesn’t try to do too much. On the offensive end he hangs out in the lane and works to establish post position. He his working on his back to the basket game and starting to grow as a post scorer. For now he does most of his scoring off of alley-opps and but back dunks.

He also plays his role well on the defense end, muscling opponents out of the paint and fighting for rebounds. His length and leaping ability have a big impact on the defensive end, even if he doesn’t record a blocked shot.

Adebayo has the physical tools to develop into a big time NBA player and his upside is high.

Cons
Doesn’t have polished moves in the paint and is used to simply overpowering opponents to score. Doesn’t demand a double team and isn’t a consistent post scorer.

Has limited ball handling and passing ability and doesn’t stretch the floor at all. Lacks a mid range game and is a poor free throw shooter.

Lacks lateral quickness and speed. Is not the most versatile defender and really needs to stick to the paint to be most effective.

A boom or bust type of prospect.
Comparisons
Reminds of Dwight Howard, although not as tall. Also similar to Emeka Okafor and Antonio McDyess