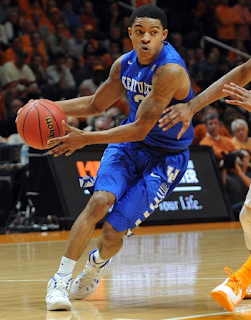 Pint-sized point guard who has a big impact on the game. A true floor general with high skill level, high character and great leadership qualities.

Pros
Ulis is the engine that makes the team run. He has elite quickness with the ball in his hands and is the type of pass-first player that teammates love to play with. His ability to get up the court in a hurry puts a ton of pressure on defenses. A one man fast break.

He’s an excellent outside shooter with a very smooth, quick release. Hits a high percentage from three and from the foul line.

Even with his elite speed, he plays under control and is an extension of the coach, on the court. Understands team concepts, spacing and setting up plays. A real leader and warrior

Cons
His lack of size is the obvious negative, especially on the defensive end of the court.

Shoots a low percentage from the field and struggles to finish in the lane.

Projection: late first or early second round pick in the 2016 NBA Draft