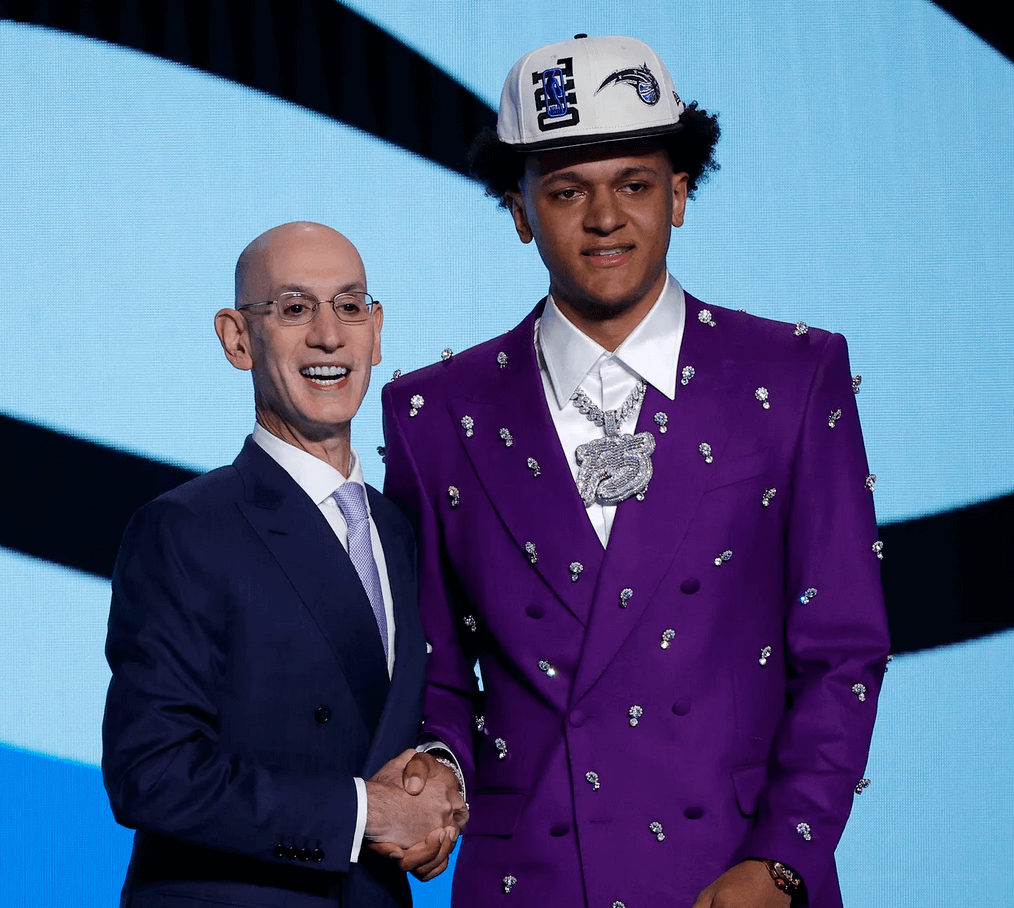 Smokescreens and Magic in the Air

The Orlando Magic hid their intentions from the world…at least until the final 10 minutes or so before the draft when Woj reported that Paolo Banchero was likely to be the pick. Picking Banchero no.1 isn’t really a surprise, he’s a worthy no.1 guy, but the way it came about with all indications pointing to Jabari Smith Jr. made it very interesting.

Usually we have a better idea, at least by a few hours before the draft, but this one came out of left field. There were some interesting betting odds taking place over night suggesting that Paolo could be the pick but the odds quickly shifted back to Jabari.

You have to wonder about the internal discussion in the Magic’s draft room leading up to the pick.

Our Neighbors to the North

For the first time in NBA Draft history Canadian players were selected with back to back picks, and in the lottery no less – Benedict Mathurin going no.6 to the Pacers and then Shaedon Sharpe no.7 to the Blazers.

Speaking of the Blazers pick, yes they tried hard to move it for a veteran but weren’t going to give it away for cheap – and with Sharpe on the board the team (along with the blessings of Dame Lillard) made the smart move and went with the high upside wing.

It’ll be really interesting to see if Sharpe can contribute this coming year. He’s been out of basketball for a year now and will have to knock off some rust but in the end his immense talent should win out.

Mathurin joining Haliburton in the Pacers backcourt is good stuff as well.

There are only 30 spots in the first round and so the numbers say that some of the 45 or so worthy first round picks will have to fall to round two. Still, it’s shocking to see the amount of talented players on the board after pick 30. And some didn’t hear their name called at all.

Florida State freshman John Butler has an incredibly intriguing skill-set but apparently not intriguing enough for a NBA team to pick him in the draft. The 7-1 wing made an interesting decision to stay in the draft despite it being clear he wasn’t a first round pick. I would have loved to see him play another year at FSU.

Baylor star Kendall Brown was the biggest shocker for me. At just 18 years old he had a hugely successful freshman season, showing off a versatile skill-set while also being one of the best athletes in the draft. He fall all the way to no.48 – and teams will regret passing on him. He might need some time in the G League learning the NBA ropes but he’s got big upside and the type of roll-player skill-set that will lead to a long NBA career.

One freshman who didn’t fall was UCLA wing Peyton Watson who went with the last pick of the first round, after a down year at UCLA. Watson will be heading to Denver where he’ll benefit greatly from the elite passing skills of Nikola Jokić (assuming he gets on the floor in the near future).

I don’t hate the pick but it feels like there were more NBA-ready players the Nuggets could have gone with at no.30. But at the end of the day the draft is about building for the future and Watson has rare athletic tools and a chance to be really good a few years down the line.

The new Overtime Elite league had high hopes of having two of their players drafted in this year’s draft. I was particularly high on Dominick Barlow and thought he’d get drafted mid second round. But neither he nor Jean Montero got selected. Not a great look for the new league.

There were no major draft night slides (some might count Jaden Hardy) but Adrian Griffin Jr. did fall a bit, compared to where many had him mocked. It wasn’t a terrible fall but for the Hawks to get him at no.16 is a steal…all things being equal. If his knee holds up and he puts his injury history behind him he’ll be a star in the league. But those questions are the reason he fell.

As for Jaden Hardy, he fell to pick no.37 which might seem like a big slide but through the draft cycle it had become clear that he was not the lottery talent that many of us had thought at this time last year. I projected him to go 25th in the draft, so he fell farther than I thought, but not by a ton.

He’s a good player who has a real chance to make it in the league but those who thought he was still going to be a lottery pick weren’t paying close enough attention. I do really like the fit in Dallas getting to play off of Luka. That will help open up the floor for the talented shot-maker.

One other player who fell farther than expected was E.J. Liddell who lasted all the way to pick no.41. This was probably about the low end of his draft range so not an unheard of fall but still most expected him to go somewhere around the mid twenties.

A few other notable first round picks include:

David Roddy is one of the more unique prospects we’ve seen in recent years with his mix of size, iso-scoring and passing ability. Getting drafted no.23 to the Grizzlies was higher than I expected but it’s an ideal landing spot for him and he should flourish as a role player in their system.

Patrick Baldwin Jr. is one of the more polarizing prospects in the draft who was viewed by some as a mid first rounder and some (like yours truly) as a second rounder. Landing at no.28 to the world champion Golden State Warriors makes sense. It’s not too big of a gamble at that point in the draft and the Warriors are in position to bring him a long slowly and see if they can help him find his rhythm again. If they miss, oh well. If this pick hits then they just added another solid piece to an already loaded line up.

Dalen Terry bet on himself and completed his ascendance into the top 20, landing at no.18 to the Bulls. I was a bit late to hop on the Terry train – and it’s always fun to watch a prospect win over the doubters one by one until the draft world finally wakes up to their talents.

Another star of the pre draft process, Jake LaRavia of Wake Forest, was selected near the top of his draft range, going no.19 to the Grizzlies, who traded up to make the pick. Like David Roddy, LaRavia is an ideal fit to fill a role on a winning team. You gotta hand it to the Memphis front office. They seem to run circles around the rest of the league on draft day.

Perhaps my favorite pick of the draft is the Warriors trading up to select Ryan Rollins at no.44. Yes, they have Klay and Poole and Moody but adding another (potential) high level scorer is an awesome luxury for the team. I wouldn’t have been the least bit shocked if they drafted him at no.28 instead.

Another second rounder that I’ve been high on throughout the process is Moussa Diabate who was selected no.43 by the Clippers. He’s a guy who will take time to develop but has a chance to be a really solid rotation player in the league. Maybe he should have gone back to school but there’s nothing wrong with being a second round pick and developing in a NBA system.

And I already mentioned Kendall Brown.

It’s always a little presumptuous to call out the winners and losers the day after the draft – we’re all normally wrong about a lot our takes, in hindsight – nevertheless, I’d pick the Detroit Pistons and the OKC Thunder as two teams that really made out well last night.

The Pistons got a player at no.5 in Jaden Ivey who could be a game changer in the league. I see shades of Ja Morant and Dwayne Wade in his game. And he’s a perfect compliment to the slower more methodical Cade Cunningham. Then the Pistons land Jalen Duren in a trade, getting a high upside center who can fill a clear role right away and could blossom into a star in Detroit. He’ll also benefit greatly from Cade’s passing and Ivey’s ability to draw defensive attention.

The Thunder got the perfect fit in Chet Holmgren and are suddenly stacked with young talent, as Sam Presti’s grand tanking scheme plays out to perfection. Then the Thunder traded for pick no.11 and selected Ousmane Dieng, a high upside boom or bust pick who also fits well with the roster. But at that point the night was still young. The Thunder went on to select Jalen Williams of Santa Clara and his namesake Jaylin Williams of Arkansas at picks no.12 and no.34 respectively. Add it all up and the Thunder will be must-watch basketball for draft fans and fans of young up and coming talent.

The Rockets did very well too, seeing Jabari Smith Jr. fall to them at no.3, getting Tari Eason at no.17 and then TyTy Washington all the way down at no.29.

Finally on a personal note, a huge thank you for tuning into my draft coverage both on draft day and throughout the year. The growth of this site has been more than I could’ve dreamed of.

Last night during the draft the number of visitors exploded and caused the site to crash, despite the scalable cloud hosting that I’ve got. I’ll be better prepared for next year and will do everything I can to keep the site up and running no matter how many visitors are logging on.

Now on to Summer League and to shifting some focus to the 2023 class!