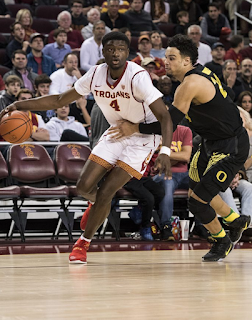 Metu has shown great improvement over the years, blossoming into a possible first round pick. He’s a
bouncy power forward prospect who loves to play above the rim and is a high level dunker and shot blocker.

Strengths
Length and athleticism are the name of the game for Metu. He can really get off the floor and is a ferocious dunker, especially dangerous on put-back slams.

One of the things that excites about Metu is his rate of improvement. He’s gone from an athlete to a basketball player, showing a much improved understanding of the game, better decision making and much better shooting touch. His free throw percentage has risen dramatically and is outside shot has shown marked improvement. If he can continue this trajectory he’ll earn a spot in the first round.

Weaknesses
Metu is far from a finished product and is not yet a complete basketball player. His low post game lacks polish and his three point shooting is a work in progress.

Physically, he’ll need to add a lot of strength to be a post player at the next level. He doesn’t project as a stretch-four, at least not early in his career, and his game is probably a better fit for the NBA of yesteryear, when power forwards where expected to play in the paint.

Projection: mid first to early second round pick in the 2018 or 2019 NBA Draft