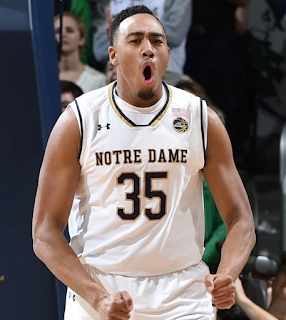 Overview
Colson is a do-everything Senior who plays much bigger than his size and impacts all aspects of the game. He can initiate the offense, shoot the 3 ball, rebound and blocks shots. He reminds of a poor man’s Draymond Green with his versatility and leadership qualities.

Strengths
Versatility is Colson’s greatest strength, in that he can do just about whatever the coach asks of him. He’s a committed defender who can hold his own in the paint, despite being 6-5, and he can rebound out of his area, using his 7-0 wingspan and good timing to attack the rebound at it’s highest point. He’s a physical player who could probably play TE in the NFL if the basketball thing doesn’t work out.

He fills up the stat sheet with blocks, steals and rebounds and also does a lot of the little things that don’t show up on the stat sheet, like helping off his man and boxing out. His heart, hustle and leadership make him a coaches dream and his ability to impact all areas of the game should lead to a long NBA career.

On offense Colson is a team first player and natural play-maker. He sees the court well and is always playing with his head up. His three point shooting has improved dramatically and he projects as a very capable NBA three point threat. He shoots a high percentage from the field, thanks in part to his great shot selection, and he’s a nearly 80% free throw shooter as well.

Colson can score off the dribble-drive and has a nice one-hand floater. He gets a lot of buckets off of offensive rebounds and does a great job of creating extra possessions for his team.

Weaknesses
His lack of height will limit his effectiveness in the paint at the next level. He’s a natural power forward who will have to continue to expand his game.

He’s not a run/jump athlete and doesn’t have elite foot-speed and overall quickness.

Can he extend his range to NBA three and hit the corner three with consistency?

Projection: mid first to early second round pick in the 2018 NBA Draft