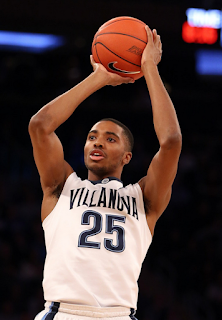 Overview
Bridges is a prototypical three and D prospect who has nice physical tools, great length and good shooting touch.

Strengths
Bridges is a superb shooter with a picture perfect jump shot and great accuracy. He hits better than 90% from the free throw line and over 50% from the field. He’s got an accurate and quick 3 point shot and hit’s about 40% from downtown. His ability to space the floor on offense and D it up at the other end of the floor makes him a valuable commodity.

Bridges is an above average athlete with a solid build and good length. His 7-1 wingspan allows him to play bigger than his height and makes him a menace on defense, both on the ball and reading the passing lanes. He can guard multiple positions, allowing him to switch on pick and rolls.

He’s fluid in the open court and reacts quickly to the play. He changes ends very well, with long strides and good straight-line speed, and he can really get up above the rim. He’s got a really good touch around the basket and is an efficient scorer who doesn’t need a lot of shots to score points.

Bridges seems to have a clear role at the next level, thanks to his outside shooting and defensive versatility.

Weaknesses
Bridges isn’t the most creative player and works better off the ball as a floor spacer. He needs to improve his ability to get to the rim and develop his drive and kick game. He doesn’t project as a first or second option on offense and is more of a complimentary piece, rather than a star.

Projection: mid lottery to mid first round pick in the 2018 or 2019 NBA Draft