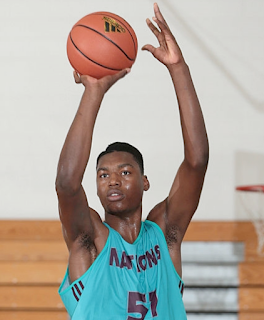 A physical specimen with elite tools; length, size and athleticism. Very raw but the sky is the limit in terms of how good he can be.

Strengths
McCoy has the size and athleticism to be a difference maker in the paint. At 7-0 tall he is well built with broad shoulders, strong arms and an overall solid frame. As he fills out the rest of his frame he should become a powerful force in the lane.

Defensively he shows good competitive fire to go along with his great size, making him a difference maker on the defensive end. He has the strength to push opponents out of the lane and has a lot of upside as a post defender.

He rebounds the ball well on both ends of the court and seems to enjoy doing the dirty work.

Has good form on his shot and looks like he’ll become a decent shooter from mid range and from the foul line. This might not be a plus in his game right now but it looks like he’ll develop into a player who can hit the mid range shot and be a good free throw shooter.

His post scoring is advanced and he has a really good left hand with a soft touch around the basket. He catches the ball well, does a good job of keeping it high, and he makes quick moves to the basket. He’s still learning to deal with a double team but he has shown the ability to move the ball or spin away from the double.

His physical tools are elite. For a player his size he shows quick and compact movements, combining strength and burst. He has the type of suddenness you usually see with smaller players.

Weaknesses
McCoy is not a particularly good ball-handler or open court player. He runs the floor well but isn’t a major threat on the fast break like many modern bigs, due to his lacks of hands and natural ball handling ability.

Although he’s developed his mid range shot he won’t be confused with a stretch-4 any time soon. He is more of an old school banger than a modern day do-everything center.

Comparisons
Built like Dwight Howard, with a similar game.