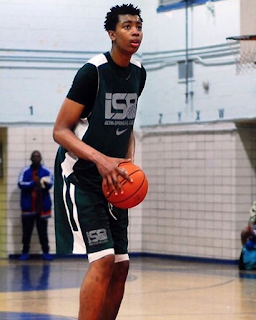 Overview
A tall and talented center who shows flashes of big time potential but is still growing into his body and developing his game.

Strengths
Has rare height and length and surprising coordination for such a tall player. Does a really nice job or running the floor and getting into position in the lane, where he can use his height to his advantage. Has good hands, catches the ball well and is an advanced ball handler for a young center.

Has impressive coordination and quickness. Gets off the floor quickly and can play above the rim with ease.

Shows an ability to handle the ball in the open court and can take his man off the dribble and get to the rim. Is developing a dangerous face-up game to go along with his repertoire of post moves. Has good form on his shot and high release point.

Can score in the low post with a baby hook that’s nearly impossible to block because of his height and length. Gets a lot of buckets off of put-backs and offensive rebounds.

On defense he does a solid job of defending the lane and shows good awareness as a weak side defender. Stays vertical and has excellent timing as a shot blocker. Knows how to defend without fouling.

Alters a lot of shots thanks to his great size. Does a nice job of battling for rebounds.

A hard worker with a desire to be great.

Weaknesses
Needs to add a lot of strength.

Isn’t very refined with his back to the basket moves and doesn’t yet have the strength to assert himself in the paint.

Comparisons
He’s like a bigger version of Skal.
Loren Woods with a better motor.
Jerome Jordan

Projection: late first to early second round pick in the 2019 or 2020 NBA Draft