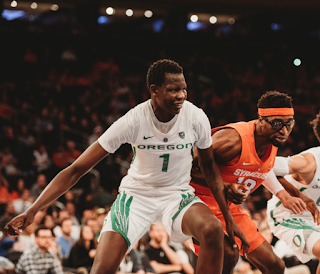 Overview
Weighed in at only 208 pounds at the draft combine. What! That’s a shockingly low number for Bol, who has been listed in the 230’s and 240’s over the past year.

The son of the late Manute, Bol Bol is an insanely long and uniquely gifted player with very intriguing upside who looks the part of an NBA lottery pick. The injury may cause him to drop a bit on draft day but if he can stay healthy and put on some weight he could be a difference maker in the League.

Strengths
Bol Bol has awesome height and length making him a force to be reckoned with in the paint. His 9-7 standing reach makes him a difference maker even if he doesn’t leave his feet. His frame is unique, to say the least.

He can change the game on the defensive end, swatting shots and altering every drive into the lane. He shows decent timing as a shot blocker and does a good job of avoiding careless fouls. He does have his weaknesses on D (see below) but he’s got defensive upside as well.

He has surprising coordination and speed for a lanky youngster, and a developing offensive skill set. He can step out and shoot threes and has a nice release on his shot, which is nearly impossible to block due to his height. He handles the ball very well for a 7-2 player and has some SF skills. He can make plays in the open court, can find teammates off the bounce and can easily pass over defenders thanks to his height.

His three point shooting looks like a lethal weapon which could keep him on the court, even if his defense doesn’t pan out.

If he can continue to grow into his body and refine his skill set, he has a chance to be really, really good.

Weaknesses
Bol is still rail thin and needs to add a lot more muscle to hold his own at the top level. He can get pushed out of the paint too easily and needs to do a better job of establishing and holding position in the lane.

The weight of 208 posted at the combine is scary. If you sneeze in his direction he might fall over.

He doesn’t have good change of direction and kind of lumbers up and down the court. This can be a big problem on defense when he’s forced to guard in space. His defensive awareness can be lacking at times and his top effort isn’t always there.

Does he have the will to be great and a real love of the game? He’ll have to play with more fire and intensity to reach his full potential.

Will injuries always be an issue? The greatest ability is availability.

Needs to develop his post game and not fall in love with the outside shot.

Comparisons
Reminds a little of Rik Smits or a poor man’s Porzingis.