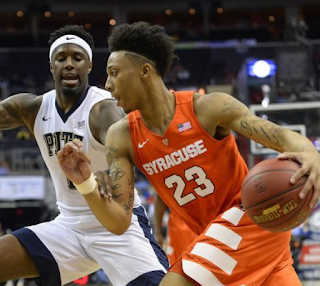 A long, athletic and talented wing who is raw but has a pure scorers mentality.

Pros
Richardson has the length and athletic ability scouts look for in an NBA wing. He’s got good burst, nice length and can play above the rim.

His outside shooting and ball-handling skills are still a work in progress but he’s been improving rapidly and if he stays on the current trajectory, he’ll be a high level scorer at the next level.

He has an attacking style on offense and is always a threat to take it to the rim. He can finish with either hand and has an uncanny ability to get his shot off in traffic.

He plays with a ton of passion and effort. Has the length, athleticism and effort to be a lock down defender and he plays the passing lanes well.

Is already showing good leadership capabilities and a willingness to lead by example. He’s coach-able and has the work ethic to reach his potential.

Cons
He tends to force the issue on offense, leading to turnovers and/or poor shot selection. Shoots a low percentage from the floor and needs to gain a better understanding of how to get his shot within the flow of the offense.

He still has plenty of  room for improvement with his ball handling and outside shooting.

Comparisons
Poor man’s Paul Pierce with some Willie Burton and Morris Peterson in his game.

Projection: late lottery to mid first round pick in the 2016 NBA Draft