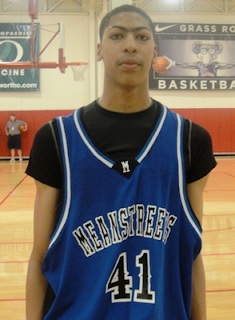 Very few players at any level have the versatility of Anthony Davis. He burst onto the national scene in 2010 after growing 7 inches in one year and now stands 6,10 and is the number one ranked freshmen this season. A former guard, Davis can do it all on the basketball court. Davis will delight Kentucky fans in his one season there and looks like a possible #1 overall selection in June.

At 6,10 Davis handles like a guard (really).  So often we throw that phrase around but this time it’s actually true. But Davis isn’t a soft, perimeter floating big man, he is the complete package.  He can score from anywhere on the floor and uses his length well to score in the paint. A very fluid and agile athlete, Davis excels at running the floor and is extremely difficult for traditional power forwards to keep up with. He is developing a nice outside shot and is almost unstoppable in the mid-range game.

On defense Davis has great timing as a shot blocker and is committed to protecting the rim. He has a chance to be the best shot blocker in the NCAA’s and could lead the NBA in blocks some day. He can guard multiple positions and is disruptive in the passing lanes. He also has all the intangibles you look for in an elite level prospect including maturity, leadership, good team-play and sportsmanship. Davis is an excellent passer and at 6,10 can play the point forward position and initiate the offense.

Like most young players Davis needs to add weight and strength. He seems to have a frame that can add a lot of muscle but it will take hard work. All signs point to Davis doing this work, adding strength and becoming a superstar power forward.