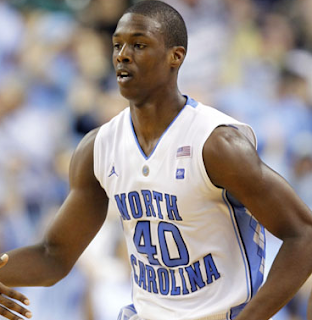 Barnes is an elite level prospect who could blossom into an NBA superstar. A humble, well spoken and personable superstar at that.

Barnes is the complete package. He has ideal size for an NBA wing at 6,8 with a strong body and awesome agility. He plays above the rim and can hang in the air with ease. A powerful dunker with an explosive first step into the lane.

What separates Harrison Barnes from the other great athletes is his outstanding shooting ability. His jumper is a thing of beauty and he hits at a very accurate rate. His range is well beyond the NBA three and (like most of his game) he makes it look effortless. His shooting ability forces defenders to play out on him which allows him to drive to the basket and make plays for teammates.  He is a willing passer and team first player who doesn’t come with any of the baggage that many star players have. Simply put, this kid is special!

On the defensive end Barnes gives good effort and is dangerous in the passing lanes, with his long arms and quick hands. Very good shot blocker for a small forward and can be a real defensive stopper when he puts his mind to it.

Doesn’t always play with passion and a sense of urgency. Disappears too often and needs to develop a killer instinct.

Commits too many dumb fouls and needs to become a better defensive player.