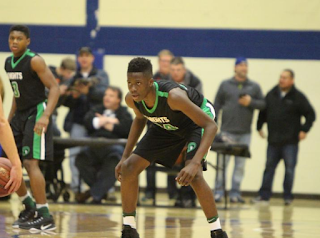 Some athletes have it and some are born with it. Alex Antetokounmpo is a 6-7 190 small forward with unlimited potential. The fruit doesn’t fall too far from the tree in this family; he is the youngest brother of NBA superstar Giannis Antetokounmpo aka “The Greek Freak”. He has two other brothers, Thanis Antetokounmpo who was drafted by the New York Knicks in 2014 and is now back in Greece playing in the Euro League with club Panathinaikos (Thanis was recently named MVP of the Greek All-star game) and Kostas Antetokounmpo who is a 6-10 4-star power forward who played for Dayton and has declared for the 2018 NBA draft (without an agent).

Alex is in the 2020 recruiting class and plays with the spotlight directly on him. The success of his brothers, especially Giannis, rests on his shoulders and he plays as if he has been here before. He has elite athleticism with a polished all-around game for his age. He is quick and fast in transition with a sweet stroke from long range. He has equal impact on defense; with his long arms and quick hands he has the potential to be an elite defender. Although he’s a few years away from being draft eligible, he projects as a possible high draft pick thanks to his length, athleticism and great bloodlines.

LJ: The life you have lived since your brother became the superstar he is. How has it been?

LJ: When did you know your brother was a star?

Alex: I always knew my brother was heading towards stardom, but when I saw him on that stage being announced a two time all-star by Kevin Hart I knew he was something special.

LJ: How have you been doing this season? What are your averages?

Alex: Although this season I and my squad fell short in the Regional finals, I had a decent season averaging 16pt/10rbs/3ast.

LJ: You have two other brothers Thanis who is already in the league and Kostas who just entered the NBA Draft. You get to learn a lot. What is the relationship you have with your brothers?

Alex: My brothers push me every day to become the best version of myself either that is on or off the court.

LJ: How much has Giannis taught you about the game of basketball?

Alex: I am a self-taught and self-sufficient player, most of my basketball IQ has come from my natural feel for the game, but having my brother there to guide me through obstacles along the way has been a great privilege to have.

LJ: What do you feel is the strength of your game at this point?

Alex: My three point shooting as well as my defense and ability to drive the ball during transitions.

LJ: Are you thinking of going to college in the US? Are any college teams recruiting you?

LJ: What have been your best individual game stats wise? What were your numbers?

Alex: It was a travel circuit game, I remember I was upset the previous night because I felt as if I turned down a ton of shots, the next night we had an early morning game I dropped 39pts and 16rbs.

LJ: If you could choose your NBA team who would you like to play for? Why?

Alex: Any team that would be ready to put trust and dedication in me for I am a long term raw athlete.

LJ: You and your brothers ever dream of playing on an NBA team together? Have you ever talked about it a bunch of “Greek Freaks” on one team that would be fun?

Alex: We aspire to all one day play in the NBA, that’s our goal and we work very hard to reach it.

LJ: What is the strength of your game that gives you the most impact?

Alex: My three point shooting and my athleticism gives me an edge over defenders

LJ: What top young international talent have you played so far?

Alex: What he is doing at such a young age in Lithuania is impressive, we are two different players that play two different positions there for that would be interesting to see.

LJ: Who is your favorite NBA player and why?

Alex: My brother off course but a close second is Devin Booker his three point shooting is unbelievable, some of the best in the league.

Alex: I am a project, my goal is to be out by then but that takes a lot of hard work and a lot of hours in the gym which I’m willing to put fourth.