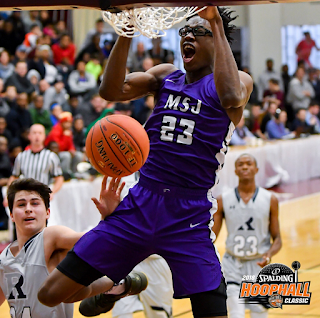 Jalen Smith is a 6-10 power forward with great skill and strength. He is coming out of the 2018 recruiting class heading to the University of Maryland. I have seen this kids game improve and his stock rise. He is a hard worker and the type of player that makes everyone around him better.

Jalen made the McDonald’s All-American game, in which he recorded 12 points 4 rebounds and 2 blocks. He is currently ranked as the 22nd overall prospect and 5th ranked power forward in the 2020 NBA draft class, assuming he declares after two years in school. I had a 1 on 1 with the talented power forward.

LJ: You love to be a winner. You have won in AAU and high school. What motivates you to be the best.
Jalen: I believe that it’s a desire that all kids have when they compete at anything that brings them face to face with their peers. I also was told that whatever I choose to do, give it my all.

LJ: Where did you grow up. How was it growing up?
Jalen: I was born in Portsmouth, Va., being the kid of a military father. I grew up in Baltimore County. Windsor Mills to be exact.

LJ: What made you commit to Maryland?
Jalen: I grew up watching Maryland with my dad and it’s the hometown team, so to be honest with you, it was an honor to have received an offer from Coach Turgeon.

LJ: You have had big games. What do you think has been your biggest game at the high school level and why?
Jalen: It was probably the game against John Carroll on senior day this year. I truly enjoyed winning

LJ: You are a monster in the post. What makes you an impact player down low?
Jalen: Well I am extremely long and tall, so that’s my advantage against some of the teams that I play against, combined with my skill set that I have adopted over the years during my time in the gym with my trainers and coaches and teammates.

LJ: What has improved the most about your game?
Jalen: I would have to say my jump shot, but it definitely needs to get better. That along with my dribbling, strength, and timing is something that I will be consistently working on over the summer.

LJ: You had 31 in a game against Dematha. Great game by the way. I noticed you were comfortable shooting that long range shot. Is your long range developing into a more fluid shot for you?
Jalen: Yes, it is especially during the long high school season when I am taking a beating every night from consistent double and triple teams, its nice to be able to depend on my outside shooting.

LJ: What NBA player do your feel resembles your game? 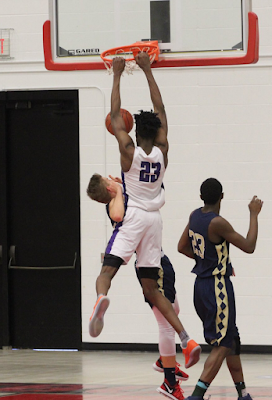 the BCL/M.I.A.A last year, but that was a big game and day for my teammates, coaches, family, and myself.
Jalen: I would like to compare my game to that of a Anthony Davis. Understand that I am not saying that I am Anthony Davis, but I like the way he plays the game.

LJ: Who is your favorite player in the NBA and why?
Jalen: Kobe Bryant, that guy is an assassin on the court and he is friends with you off of it.

LJ: We rate you a first round talent at NBA draft room for the 2020 class. Do you know at this time when you will enter the NBA draft?
Jalen: Well if you guys have me going that soon, then I have a lot of work to do between now and then on the court and inside the classroom, because I want to at least have my degree by then or at least be ¾ complete with it.

LJ: What about your character will a team like?
Jalen: I am a team player, but I believe that I am fun to be around also. I love to pick other peoples brain and game so that I can improve on mine.

LJ: I have seen you take a game over. What about your skill set allows you to make the most impact?
Jalen: I want to believe that it starts with my ability to alter and block shots on the defensive end, then get down the court as quickly as possible on offense and being able to stretch the court during offensive sets.

LJ: If you could choose, what team would you love to play for in the NBA?
Jalen: Any team that would love for me to play for them. The chances of even making the NBA is slim, so it would be an honor to play for whomever selects me….did I mention the Lakers?

LJ: Overall what does Jalen Smith bring to an NBA team?
Jalen: The ability to learn, work hard, play hard, and improve night in and night out. Thanks for giving me the opportunity to do this interview and you take care.

LJ: You too my guy, always been a fan and I will be watching.