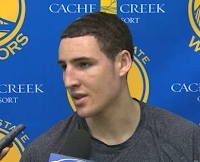 Assuming there is a 2011/12 NBA season the Golden State Warriors will have a young and exciting roster, ready to challenge for a playoff spot in the Western Conference. In fact, new head coach Mark Jackson all but guaranteed that the Warriors would be in the playoffs this year.  So what’s all the excitement about:

The Warriors have a ton of young talent and while it remains to be seen how they come together with a new coach and with the persistant rumors of Monta Ellis being traded, there is a world of potential. 2011 first round pick Klay Thompson should be really fun to watch and has a lot of upside as a scorer and three point specialist.

The guard play gets a lot of the attention but young big men David Lee and Ekpe Udoh form a promising front-court as well. Udoh is entering his second season after being the #6 overall pick last year. He was injured for part of last season but showed flashes of being an elite shot blocker and excellent rebounder. He is not much of an offensive threat but with Curry, Ellis and now Klay Thompson shooting the ball that shouldn’t be an issue.

Dorell Wright had a break out season last year and looks poised for another good campaign, provided there’s no lockout.  The three headed monster at the guard position should be able to score with any team in the league and if they can tighten up their defense that guarantee of making the playoffs might just be fulfilled.