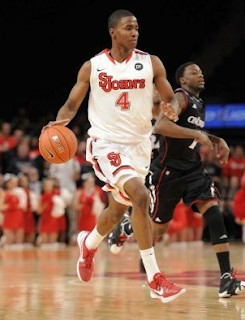 Looking around the interwebs I see that a consensus is beginning to form about how the first round of the NBA Draft will play out. As usual, draftniks feed off of each other’s lists and the player rankings begin to look more and more alike. With that in mind I’d like to point out a few prospects that I think will (or should) be drafted higher than most mock drafts suggest.

Moe Harkless – 6,8 – Small Forward.  Harkless is a young (one and done) player who has all of the tools to become an excellent NBA wing. He has great length, athleticism and a well rounded game. He plays a mature game and has an understanding of how to play that belies his years. I see Harkless becoming a Wesley Johnson or Paul George type of player and think he should be a lottery pick. Most mocks have him in the low twenties – too low, in my opinion.

Andrew Nicholson – 6,9 – Power Forward.  For a team looking for a player to contribute right away Nicholson would be a great pick. He has spent four years polishing his game and is ready to come in and play big minutes right away. He has an excellent touch from outside and will be a difficult matchup for most power forwards. The consensus is that Nicholson will be picked in the twenties but I expect to see him come off the board in the mid teens.

Royce White – 6,8 – Power Forward. White is another player expected to fall into the twenties on draft night but, in my opinion, deserves to be drafted higher. He is a unique player, a forward who can handle the ball and pass as well as most point guards, and he will be a valuable asset to an NBA team.

I’ll be watching for these three players to surprise on draft night and if they do end up falling into the twenties, the teams drafting them will be getting steals.