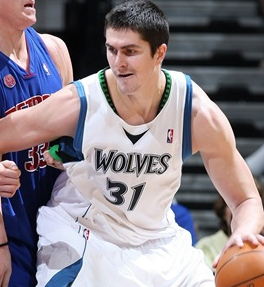 The NBA Draft is notoriously hit or miss – and history shows us that it’s usually miss. Still, some lottery picks stand out above the rest…as disastrously pathetic attempts at talent evaluation. Let’s highlight the 10 worst failures since the year 2000:

10) Jimmer Fredette – #10 Pick in the 2011 NBA Draft
Leave it to the Kings to draft a player to sell tickets instead of win basketball games. Jimmer isn’t horrible, but what makes this pick horrible is the list of players drafted behind him including: Klay Thompson, Kawhi Leonard, Nikola Vucevic, Markieff and Marcus Morris and Kenneth Faried. The Kings got a better player with the last pick in the draft (Isaiah Thomas) than at #10.
9) Dion Waiters – #4 Pick in the 2012 NBA Draft
I know he hasn’t even played a full season yet but Dion Waiters was a horrendous reach at #4 by the Cavs. If Waiters had been drafted at #10 he still might have made this list. The kid can score the ball but only when shooting in bunches and I don’t see the athleticism or talent needed to excel in the NBA. I hope I’m wrong (gotta pull for the Cavs!) but I doubt it. The Cavs should have Andre Drummond developing next to Tristan Thompson but, no…
(UPDATE: OK, point taken. This one’s premature. More of a projection).
8) Nickoloz Tskitishvili – #5 Pick in the 2002 NBA Draft
NBA teams love size, especially when they don’t actually scout the player beyond a few videos and a recommendation from an over paid agent. The Nuggets reached for this lanky European, who never did more than take up space in an NBA game. In their defense, most of the rest of the 2002 draft class was pathetic as well. 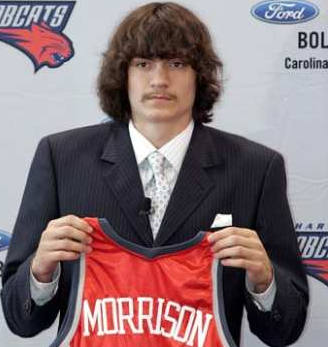 7) Adam Morrison – #3 Pick in the 2006 NBA Draft
If mustaches could score baskets Adam Morrison might have been a solid NBA player. But the only thing solid about Adam Morrison was his dogged determination to keep the 70’s alive, on his face. The Bobcats might have done better with Brandon Roy, Rudy Gay or Rajon Rondo, or just not making a selection at all.
6) Rafael Araujo – 8th Pick in the 2004 NBA Draft
Again, an NBA team drafting size over talent. Araujo was a bully in college ball but had no talent and should never have been a first round pick, let alone a lottery pick. The Raptors would have done well to select Andre Iguodala, Al Jefferson, Josh Smith or a host of other good players instead of the bruising (and steroid using) Brazilian. 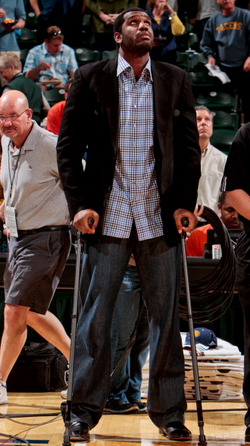 It’s hard to be too hard on Oden or the Blazers. There was no way to tell that his knees would disintegrate into sand or that he would fail to ever make a difference in an actual NBA game. But when you draft a player #1 overall who is best remembered for an unfortunate self portrait – and you draft him ahead of Kevin Durant – that’s a problem.
4) The Entire 2000 NBA Draft Lottery
There are strong draft classes and there are weak draft classes. And then there’s the 2000 draft class. The best player from this class was selected at #43 (Michael Redd). The lottery featured unique talents like Mateen Cleaves, Etan Thomas, Jerome Moiso, Marcus Fizer, Stromile Swift and… you get the point. Kenyon Martin was actually a good pick at #1 overall. Not because he was a good player but because the players drafted behind him just sucked that much more.
3) Joe Alexander – 8th Pick in the 2008 NBA Draft
A unique athlete who looked like he had the tools to become an NBA player. Turns out he did not. The Bucks could have selected Brook Lopez, Roy Hibbert, Ryan Anderson, Serge Ibaka, Nicolas Batum or any number of far more talented and productive players. Instead they selected jumping Joe Alexander. Ouch.
2) Hasheem Thabeet – #2 Pick in the 2009 NBA Draft
I’ll admit, I thought Thabeet would be a player. Maybe not a #2 overall type player but I didn’t hate the pick at the time.  Time has shown us that Thabeet is not a player. He doesn’t have the talent to catch the ball, let alone score it, and he always looks so puzzled by the game of basketball.
1) Darko Milicic – #2 Pick in the 2003 NBA Draft
One of the best draft classes of all time features one of the worst draft picks of all time. The Pistons could have played it safe and gone with Carmelo Anthony. They could have taken a little risk and selected Chris Bosh. They could have gone out on a limb and selected Dwyane Wade but no, Darko was their man and they’ve been haunted by the pick ever since.

I’m sure I’m forgetting some equally horrible picks. Feel free to make suggestions for this list @nbadraftroom on Twitter