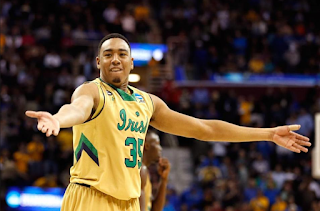 This year’s draft class is getting more buzz than a beehive but there are a few first round talents that are flying under the radar. Here, in no particular order, are a few NBA draft prospects who are either unrecognized or underrated by the draft community:

If it wasn’t for a mid season injury Notre Dame combo forward Bonzie Colson would be in the running for national player of the year and would be getting a lot more draft hype. While he’s undersized by NBA standards at 6-5, he’s got great length (7-0 wingspan) and, more importantly, he plays with perfect positioning on the defensive end and uses his broad frame to hold his ground in the lane. He’s a bit heavy footed and not exactly a high-flyer but Colson plays a complete game and projects as a glue guy at the next level. We’ve had him in the first round of our 2018 mock draft all season long. 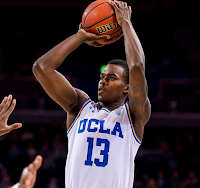 UCLA freshman Kris Wilkes gets a few mentions in 2019 draft talk but we feel he’s a legit first round talent who could enter his name in the 2018 draft. Wilkes doesn’t have one standout skill but he’s a multi-talented small forward with NBA size and a sweet shooting stroke. Wilkes reminds of Kris Middleton (and not just because they spell Kris the same way) with his smooth offensive game, excellent length and good feel for the game. He’s an excellent open court athlete with NBA speed and a high all around skill level. Keep an eye on the early entry list this year to see if Wilkes tests the draft waters. 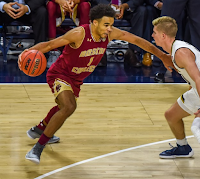 Jerome Robinson is a 6-6 scoring guard from Boston College who is putting up big numbers and has NBA shooting ability, yet is barely mentioned in mock draft land. The junior is leading his team in scoring while shooting the ball at a great clip from the field, from 3 and from the foul line (48%, 42%, 83%). He’s got a wiry frame and good (but not great) athleticism. His frame and his game remind of Spencer Dinwiddie. If he enters the draft this year he should go in the late first to middle of the second round. 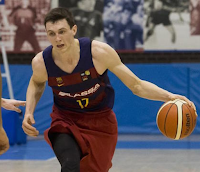 On the international front, Latvian wing Rodions Kurucs is a high level NBA prospect who might not be known by most casual draft fans. We’ve seen international players get a lot of hype in recent drafts (Hezonja, Bender, Doncic) but Kurucs, a 6-8 skilled small forward who shoots with range, doesn’t get much pub. Most draftniks agree that Luka Doncic and Dzanan Musa are the top 2 international prospects but don’t be surprised if Kurucs gets a look in the mid to late first round. He’s a prime draft and stash candidate who could look like a draft day steal in a few years.