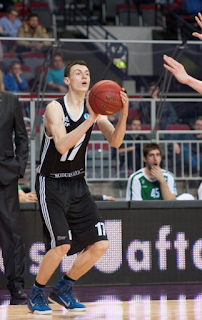 A prototypical wing who can score from three levels and has enough size and speed to defend in the NBA.

Pros
A natural at scoring the basketball, Kurucs can shoot from deep, hit from mid range or take it all the way to the tin. He shows a nice ability to shoot off the dribble and is always a threat to pull up for three.

He’s well built with broad shoulders, good strength and decent bounce. He has good size on the wing, which helps him shoot over defenders and get his shot off in the lane.

He drives the ball well (with his right hand) and drives the baseline well. Has creative ways of finishing in the lane and an overall knack for scoring the ball. He can hit on runners and floaters and he also shows some ability to play with his back to the basket and can hit the turnaround J over either shoulder.

He has some point forward tendencies and is a very willing passer. He can lead the fast break and find the open man or fill the lane, using his size and natural scoring ability to make plays in transition.

Kurucs is a very heady player who understands how to make the right basketball play. He spaces the floor well, knows how to take proper angles and understands how to play team basketball. He’s a good fit for the modern NBA where ball movement and spacing are at a premium.

Cons
Doesn’t have great lateral quickness, which could hinder his ability to defend NBA level quickness. Has good but not great overall athleticism.

His drives to the rim are mostly with the right hand and he needs to develop his left hand dribble and his overall ball handling skills.

Projection: late first to early second round pick in the 2018 NBA Draft