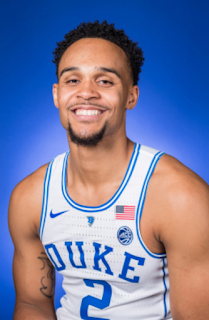 A polished offensive talent with a sweet shooting touch and great overall feel for the game. A strong
and well built player but possessing only average athleticism.

Strengths
Gary Trent Jr. plays like a 10 year vet, showing great poise and decision making, to go along with an advanced arsenal of offensive moves. He scores the ball well from all three levels and can really light it up from downtown. Has a compact and consistent jumper, which he hits at a high percentage.

Trent has enough strength and girth to bully his way to the rim against most guards and can finish through contact. Uses his size well to gain post position and to clear space for rebounding. Is more of a below the rim player who knows his strengths and plays with great technique. Fundamentally sound in all aspects of the game.

A good passer and very aware player, Trent plays with his head up and sees the floor well. He has advanced ball handling skills and can drive the ball effectively with either hand.

Being the son of a former NBA player has accelerated his learning of the game and made him physically and mentally ready for the highest levels of play.

He plays with a ton of grit and determination. His focus on improving his craft has led to an all around level of polish and skill that is advanced for his age.

Weaknesses
He isn’t much of an above the rim player and lacks high level explosiveness. Doesn’t have quick feet and kind of lumbers up the court.

Doesn’t have ideal length for his size which, combined with his lack of leaping ability makes it hard for him to compete for rebounds or make plays at the rim.

Doesn’t project as a great perimeter defender in the NBA and might be a step slow by NBA standards.

Comparisons
Reminds of Wesley Mathews and has some Aaron McKie in his game.