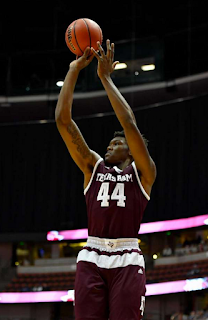 Overview
A raw but promising PF who has nice physical tools including great length, quickness and leaping ability. One of the most vertically explosive big men we’ve seen, on par with Marquese Chriss.

Strengths
Williams is a bouncy and strong athlete who can explode off the floor for dunks and is a menace on the defensive end. He’s got great length (7-4 wingspan), good timing and a commitment to protecting the rim. Moves his feet well with good back-peddle and lateral agility and can cover a lot of ground quickly.

Although his offensive game is raw, he shows some promise with his back to the basket moves, with good body control and a high release point on his jump-hook. His leaping ability allows him to get his shot off in the lane, even against taller defenders.
Is a solid free throw shooter for a young big man.

Moves without the ball well and does a good job of changing speeds to get open for the pass. Is always a threat for back door lobs and shows off his quickness on the pick and roll.

Knows his role and players within himself. Does the dirty work and plays with passion. Is an excellent offensive rebounder and keeps a lot of possessions alive for his team.

Weaknesses
Very raw on the offensive end, with a lot of development left to do before he becomes an NBA level player. Must improve his touch around the rim and refine his post-up game. Doesn’t have a go-to move in the post and does most of his scoring on dunks. Lacks consistency on his jumper and isn’t much of a threat outside of 15 feet.

Doesn’t have great handles and needs to do a better job of catching the ball and protecting it in traffic. Too turnover prone.

Can get out of position defensively and lacks fundamentals. Doesn’t box out well and relies on his length and athleticism. Sometimes seems lost on the court and not fully engaged in the action.

Hasn’t shown the improvements you’d expect after his Freshman year. Is still a work in progress.

Projection: lotto to mid first round pick in the 2018 NBA Draft
Tweet to @NBAdraftRoom
by NBA Draft Room