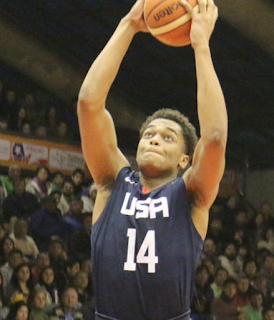 Well built and strong power forward who is very skilled at scoring the ball. He doesn’t have elite athleticism but he’s got length and he’s a well rounded player with a mature game and a lot of natural talent.

Strengths
Washington has natural strength and the type of body that could withstand the rigors of NBA level play. He has broad shoulders and a wide base yet still has good agility and is light on his feet.

On offense Washington can do a bit of everything. He can score in the post, using his strength to bully opponents. He has decent length and good leaping ability, allowing him to make plays above the rim. He also has an advanced mid range game and is a lights-out shooter from the elbow and all around the key. His range is expanding and he should develop into a solid three point shooter in time.

His passing ability stands out for a PF and he can initiated the offense from the high post and shows great court vision.

Washington is a warrior on the court and plays to win. He has an advanced understanding of the game and shows a high amount of polish and refinement for such a young player. His awareness on the court and his knowledge of the game make him a glue-guy who helps the team win, even when he’s not filling up the stat sheet.

Weaknesses
Washington doesn’t have prototypical size for the PF position and will have to expand his game and become more of a perimeter threat. He can get by with overpowering opponents in the paint but won’t be able to play that game at the NBA level.

He doesn’t protect as a low post scorer or rim protector at the next level and there are questions about how his game will adjust to NBA length/size. His lack of ideal size and top end athleticism knock him down a notch in terms of what his upside could be. He projects as a good but not great prospect who should have a long NBA career but might not be an All Star at the next level.

Comparisons
Built like David West with some Rodney Rogers in his game.

Projection: late first to early second round pick in the 2019 NBA Draft