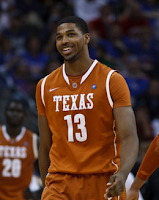 After one season for the Longhorns Thompson is bringing his consider skills to the NBA. He doesn’t receive the same amount of hype and press that some of the other top prospects do but he is very much an elite prospect and is just scratching the surface of his potential.  It will be interested to see where he goes on draft day.  My guess is that he doesn’t last very long and could even be a top 7 pick.

Thompson does everything a power forward should do.  He rebounds well, defends, blocks shots and runs the court very well.  He is one of the best offensive rebounders to come through college ball in the past few years and is starting to come along with the rest of his offensive game.  On defense he is a very good shot blocker who plays great help defense and protects the lane well.  He is a solid defensive rebounder and starts the break well with good outlet passes.  One of his best traits is his hard work and hustle which really shows in how well he runs the floor.  On most possessions he beats his man down the court and puts a ton of pressure on opposing power forwards.  Very young and has huge upside.

Offense is still a work in progress for Thompson and his free throw shooting is woeful.  He has decent form on his shot and I wouldn’t be surprised if he becomes a 70% free throw shooter in a few years.  The same goes for his mid range jumper which is not falling yet but shows potential for improvement.