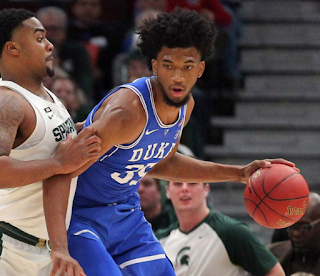 Bagley might be the highest upside prospect since Anthony Davis or Ben Simmons. He has elite coordination and speed for his size and he’ll be a match-up nightmare once he gets a consistent jump shot. His offensive game is still unrefined but he’s got great work ethic and all the physical tools to develop into an all time great.

Strengths
Bagley has great size and athleticism and a rare skill set for a 6-11 player. He has coordination and body control normally seen in smaller players and has great suddenness with his movements. His strength and burst to the rim are impressive and he has the foot-speed to blow by defenders with the dribble.

He’s also a really good leaper for his size and he plays above the rim effortlessly. He is an overall smooth and fluid athlete who already has an NBA body. His second jump ability is special.

On offense he can do a little bit of everything. He has great hands and catches everything thrown his way, whether it’s on the perimeter, in the post or on backdoor lobs. He does a great job of scoring around the basket and can finish with either hand (he’s a lefty), although he’s still learning to trust his right hand. His post game is advanced for his age and he shows a nice array of ball fakes, physicality and polished footwork. He does a nice job of getting the defender off balance with his fakes and can catch defenders off-guard with his suddenness. Although his post game is raw, his elite athletic ability and awesome work ethic make you believe he’ll develop into a polished post scorer (and all around offensive talent).

He handles the ball and sees the court well and has a good feel for moving the ball out of the double team. His outside shooting shows a lot of promise and he’s developed a nice mid range jumper, which he can get off the turnaround or on step back moves. He does a good job with the jab step and playing from a triple threat position. He’s developing range out to the three point line and he’s a solid catch and shoot player. His ability to step into a three point shot on fast break situations is impressive for a guy his size.

Bagley plays hard and looks to dominate. His defense is still a work in progress but he does show great versatility and the ability to guard on the perimeter. His quickness and agility, along with his great motor, should help him develop into an excellent defender as he gains experience and strength.

His rebounding, especially on the offensive end is a major asset. He keeps possessions alive and shows great timing cleaning up after missed shots. He could become one of the best offensive rebounders in the game.

He can take a defensive rebound and go coast to coast, either finishing in the lane or setting up a teammate for an open shot. His ability to run the floor is truly special and his ball-handling ability is solid for a young power forward.

Weaknesses
Bagley will have to add a lot of lower and upper body strength and continue to fill out his frame. He can get muscled out of the post and doesn’t always have the strength to finish the three point play. His lack of strength gets exposed on both ends of the court. On offense he gets pushed out of the paint too easily and on defense he struggles to control the paint. He plays high and doesn’t get good leverage on box outs or post up moves. His lower body is especially thin and light.

He isn’t much of a rim protector and tends to shy away from contact and fails to challenge shots at the rim.

He needs to work on finishing around the basket and become a consistent mid range shooter. He also needs to get better at dribbling and finishing with his right hand. He does most of his damage with his left hand and can be very predictable with his dribble drive and post up moves.