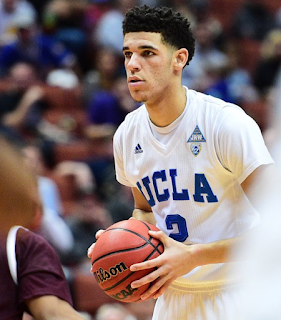 Pros
Has prototypical size, athletic ability and skill level for a point guard. He changes ends of the floor like a greyhound and is an exceptionally quick and bouncy athlete. Does a great job of pushing the pace and turning the game into a track meet.

Ball’s passing ability sets him apart. He has elite vision and an uncanny way of setting up teammates for the open shot. His pass-ahead ability is unique, and is on par with D’Angelo Russell and Ben Simmons.

Ball is a physically imposing guard who can out muscle most other point guards and out run everyone on the court. He has the physical ability to develop into an NBA all star and he has the court awareness and basketball I.Q. of a future NBA great.

Although his jump shot has more funk than George Clinton, he makes a high percentage and has shown legit NBA range. His step back shooting ability allows him to get his shot off just about any time he wants. Ball also shows a nice ability to penetrate the lane and hit acrobatic shots in traffic. His court awareness, length and leaping ability make him dangerous on backdoor lobs and he can finish with highlight reel dunks.

He is an active defender who plays the passing lanes well and has great instincts, showing the ability to anticipate his opponents movements.

His most valuable quality is the pace at which he plays the game; always pushing the tempo and controlling the flow of action. He should be a difference-maker from day one in the NBA.

Cons
Isn’t the smoothest shooter and has a low, awkward release on his shot, which makes it difficult for him to shoot off the dribble.

Is a below average free throw shooter for a point guard, hitting below 70% from the line.

Doesn’t do much in the mid range and doesn’t have a great back to the basket game.

Comparisons
Reminds of a taller Jason Kidd with a little Penny Hardaway in his game. Or a mix of Jason Kidd and Zach LaVine.