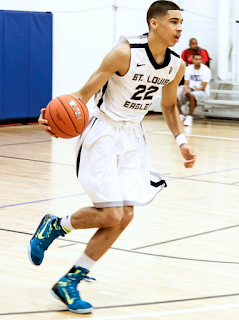 A versatile wing player who scores well from all 3 levels, Tatum has an old school mid range game and super smooth natural ability.

Pros
A very well built, strong and athletic wing who is just scratching the surface of his potential. Has a nice feel for the game, high skill level and a NBA body. His jump shot is a thing of beauty and he can get his shot against any defender.

Tatum is a skilled ball handler and can score the ball in a variety of ways. Has a natural feel for the game which, combined with his ball-handling ability, helps him blow by defenders and score at the rim or create space for the step back.

He projects as a high level NBA three point shooter (although has work to do) and an overall nightmare to defend.

Has some point-forward tenancies and is a good play-maker.

A strong perimeter defender for his size, he shows good determination on the defensive end. Can guard 2’s, 3’s and 4’s.

Cons
There’s not a glaring weakness in his game. Gaining consistency and continuing to build on his skill level and understanding of the game is all that’s needed.

He doesn’t project as much of a rim protector at the next level, except maybe in transition D.

Doesn’t have exceptional length for his size (reported 6-9 wingspan) and won’t be able to overpower/outmatch defenders at the next level. Can he score in the post against length?

Is not yet a polished three point shooter and will have to expand his game at the next level.

Comparisons
Reminds of Paul Pierce with his versatile and smooth game and nice length on the perimeter. And there’s some Jabari Parker in his game. Maybe a little Glenn “Big Dog” Robinson.