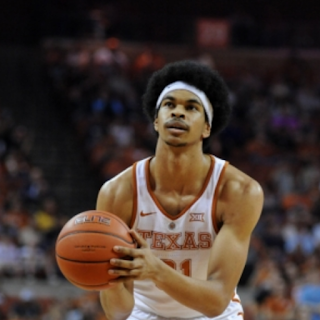 A true post player with a fundamentally sound game, who is a difference maker on both ends of the court.

Pros
Jarrett Allen lives on the low block, where he can score on a variety of back to the basket moves and face up jumpers. He doesn’t blow you away with athleticism but he has the size and strength to be a major force in the paint and is a rock solid, fundamentally sound player.

He does a good job of establishing position and shows his hands well, getting himself ready to receive the post entry pass. He finishes well through contact and doesn’t shy away from physical play. He’s very efficient with his movements and plays a steady, efficient game.

Does a good job of defending the post, playing with discipline and good positioning. Uses his length well to disrupt shots without drawing fouls. Knows his role as a rebounder and post defender and does a nice job of hustling after loose balls. Plays within his limits and within the flow of the game.

Might not be an elite post scorer but will have a lot of value at the next level as a rebounder, defender and fundamentally sound big man who does a lot of the little things well.

Cons
Allen is not a big time athlete and he kind of lumbers up and down the court. He doesn’t get great lift and is just an adequate above the rim player. He’s got an old school game and doesn’t stretch the floor like many modern Bigs.

Is too turnover prone and still learning to take care of the ball. Needs to do a better job of moving the ball out of the double team.

Comparisons
Reminds of Joakim Noah with his great defensive play and solid rebounding, while struggling to shoot the ball.