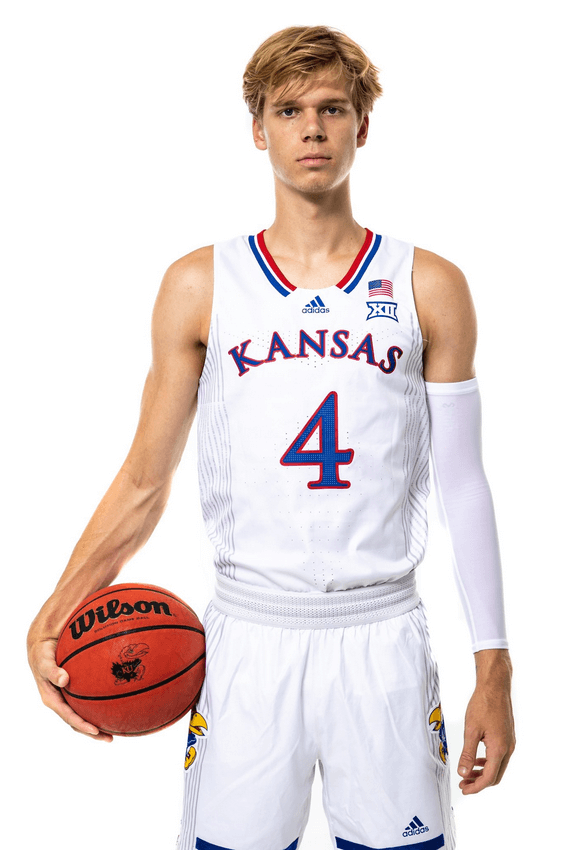 Jett Howard – SF – Michigan – Jett was a bit overlooked in his recruiting class but has come out of the gates fast and is looking like one of the best freshmen in the land. The sweet-shooting 6-7 wing is playing with a ton of confidence early in his Michigan career. He’s got NBA size, a nice release on his jumper and isn’t afraid to let if fly from downtown. He’s also got a strong frame and can handle contact on the way to the rim. Howard is moving up draft boards and is looking like a first rounder with lottery upside.

Gradey Dick – SG – Kansas – Gradey has one of the smoothest jumpers you’ll ever see. As one of the youngest players in his class he’s already making a big impact for the Jayhawks and starting to get a lot of draft buzz. The NBA loves players with his blend of size and shooting ability and he has a chance to rise into the mid first round if he continues his strong play. Through 4 games he’s averaging nearly 17 ppg, shooting 55% from the field and an awesome 50% from 3pt.

GG Jackson – PF – South Carolina – Jackson got off to really nice start to his career putting up 18 and 10 in a win against South Carolina State and is so far averaging 16 and 8 through 5 games. The 6-9 forward showed off his versatility and mobility and played with a high motor all game long. He’s an incredibly fluid athlete for his size and makes the game look so easy. It’s obvious that he’s young and unpolished but the natural ability is so clear. He’s also shooting 36% from 3pt land to start his college career and has looked comfortable on the perimeter. It’s hard to imagine him not being a top 10 pick in June.

Brandon Miller – SF – Alabama – There’s been a growing hype about Brandon Miller and so far he’s living up to the high expectations. The 6-9 wing is a multi-talented offensive player who can rain 3’s from deep and operates well in the mid range. He can also initiate the offense and has displayed nice passing instincts. Miller also guards up and down the line-up and is a real nuisance on that end of the court. He’s the type of two-way big wing that the NBA covets and should be drafted accordingly, likely in the top 10.

Jarace Walker – PF – Houston – Walker is a man-child who is too much for most college players to handle. The advancement in his skill level over the past two years has been impressive and he’s becoming a much more polished offensive player. His shot has been falling at a good clip to start his college career with shooting splits of 50/42/71 early on, including a 23 point outburst against St. Joe’s in his second game.

Cason Wallace – PG – Kentucky – Cason is one of those players who just has that “it” factor. He’s a gamer, a playmaker and a leader on the court who looks like a 10 year vet with his demeanor and decision making. The 6-3 guard looks like he’ll be the engine that makes the Kentucky Wildcats run this year and he is very likely a one and done first rounder. He has had some ups and downs to start is UK career but it’s been mostly up.

Judah Mintz – SG – Syracuse – Mintz is a scorer, pure and simple. When he’s hitting shots he’s a lot of fun to watch. When his shot isn’t falling…well, he just keeps shooting. So far this season Mintz is scorching the nets, hitting 58% from the field through his first 3 games. If he can round out the rest of his game he’ll have a chance to make it at the next level, most likely after another year or two of college ball.

Meanwhile, on the other end of the spectrum, a number of star freshman have seen their college careers get off to a delayed start – mostly due to injury plus one suspension.

Dariq Whitehead – SF – Duke – started the season recovering from a foot injury and then put up 6 points in his first and only game so far. There’s no cause for concern, he’ll knock off the rust and get up to speed soon.

Baba Miller –SF – Florida State – has been suspended until early January (for receiving travel benefits). Miller could be a lottery pick but we won’t get to see his talents for another two months.

Cam Whitmore SF – Villanova – is out for a while longer after having surgery on his thumb in October.

Jaden Bradley – PG- Alabama – is still getting back into form after missing the spring and summer (foot surgery in March). It seems like Bradley will be back in action fairly soon.

MJ Rice – SF – Kansas – is sidelined with a lower back injury and it’s not clear when he’ll be back on the court.