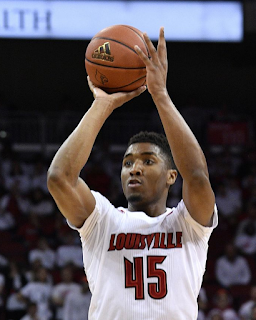 Mitchell is a defensive specialist and NBA level athlete who is still coming into his own on the offensive end. He doesn’t have great height for the SG position but his 6-10 wingspan and athleticism allow him to play bigger than his listing.

Pros
Mitchell has all the tools and the mentality to be a really good NBA defender and solid two way player. He might not be a guy that averages 20 points per game but he can contribute in so many ways that he has starter potential.

His athletic ability is near elite level. He’s a great leaper, super quick in the open court and very powerful for 6-3 player. Mitchell’s rebounding from the guard position and his ability to lock down opposing guards bring a ton of value.

On offensive he’s an aggressive slasher who knows how to space the floor and find the cutting lanes. With the ball in his hands he does a good job of penetrating into the lane and collapsing the defense, using a quick first step and using his broad shoulders to muscle past defenders. His outside shooting is improving and it wouldn’t be a surprise to see him become a solid 3 point shooter in time.

His leaping ability and length make him an excellent above the rim player who is able to throw down some highlight reel dunks.

He plays the game with passion, intensity and a downhill style of play, which will make him a crowd favorite for the team that drafts him.

Cons
Although he increased his three point shooting to 35% this past season his overall FG% took a step back to under 41%. He lacks consistency with his shot and lacks ideal size to get his shot off. This will likely be more of a challenge at the next level when he’s going against NBA size on the wing. He doesn’t project as a dangerous three point threat in the League, at least not till later in his career, and his mid range shooting will have to improve as well.

His ability to handle some play-making duties gives him a lot of value but he’s not a pure point guard and doesn’t have the best instincts for running an offense.

Comparisons
Reminds of Marcus Smart, both in body size/athleticism and in their offensive limitations.

Projection: mid to late first round pick in the 2017 NBA Draft