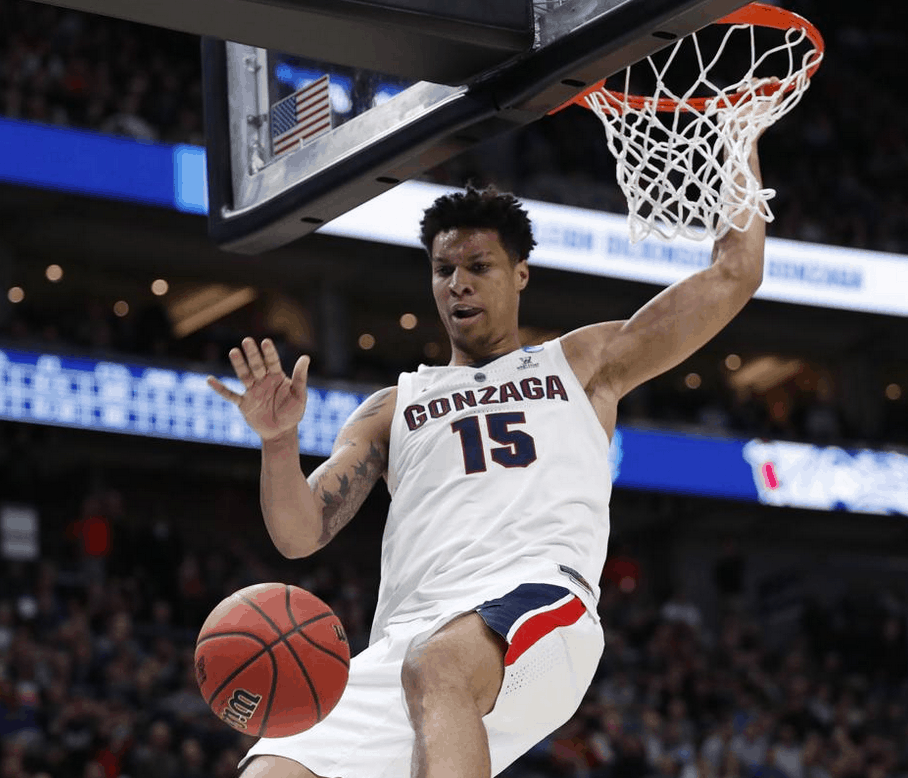 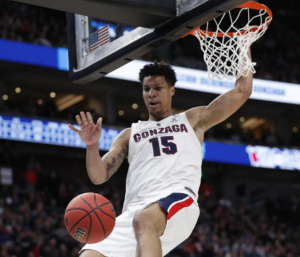 In all my time evaluating NBA Draft prospects I have never seen a larger divide among the general consensus on an individual prospect than there currently is on Brandon Clarke. He is what traditional scouts or executives in the league generally tend to avoid until the late 1st round, as he’s already 22 years old and has a relatively short wingspan along with other uninspiring physical measurements.

Along with those concerns he doesn’t possess a cemented offensive identity with his lack of a jumper at the moment. His value differs significantly from mock draft to mock draft, as I’ve seen him penciled in anywhere from top five to the late first round. Despite all that, he is one of my favorite prospects in this entire draft, and after reading this he should be one of yours too.

What he does bring to the table: he is extremely good at basketball right now despite his deficiencies and question marks. His touch around the rim is elite, and he’s proven to be a hard worker as he completely overhauled the mechanics on his jumper from his stint at San Jose State. He still has plenty of work to do with his shot (especially the release point), but I believe at the very least he will be able to hit from the mid-range and continue to be one of the top percentile finishers around the rim with his remarkable touch and finishing ability.

If he ever starts knocking 3’s down at a reasonable rate it’s quite clear to me that he’d be a top 5 prospect from this class when we look back five years from now. Betting on skills to develop is a risky business, so let’s focus on the prospect he is right now without the three-point shot.

Defensive role: His off-ball instincts along with his precise timing allow for him to almost play like a free safety making impact play after impact play. He creates events at a high-level and offers rim protection in a variety of ways, whether it’s in transition, rotating from the weak side, at the point of attack or from recovery.

Offensive role: He excels as a rim runner in transition and a vertical floor spacer in the half-court, as he can play off the high post or on the weak-side baseline looking for cracks in the defense. He is a top-level decision maker that makes the right plays more often than not with the ball in his hands.

Let’s start with his physical measurements, then dive into his agility tests that he completed during the combine. The 22-year-old Gonzaga product stands at 6’8.25” while weighing in at 207 pounds with 5.0 percent body fat. His wingspan matched his height exactly at 6’8.25” which was not encouraging for his stock, but personally I believe wingspan isn’t important unless the instincts and basketball IQ aren’t there, and with Clarke he certainly has both of those attributes. Along with those instincts and high basketball IQ he is one of the best athletes in this draft and has impeccable timing when it comes to shot blocking and weak-side rotations. His motor, high basketball IQ, general feel for the game and otherworldly athleticism lead me to believe he has more upside than your typical 22-year-old prospect.

His vertical leap was an incredible 40.5 inches, which was the 3rd highest in the entire event and highest for his position. He is an absolute freak athlete which he’s already shown at the combine, as he tested at an elite level in his drills to make up for some of his uninspiring measurements. He screams “switchable” on the perimeter, which in today’s NBA is an extremely valuable asset for any frontcourt player.

Here’s how he compared to former number one pick overall John Wall who was, you know… a freakishly athletic point guard.

Look at how his statistics measured up against Zion Williamson’s last season. I understand he’s three years older and plays in a weaker conference, but it’s incredible to see how historically good these two were last year.

In their match-up head to head in Maui back in November they each recorded:

Where Does Clarke Fit?

Here are my 5 favorite fits for Brandon Clarke at the next level:

This is the fit the Timberwolves should be praying for. I cannot think of a more perfect frontcourt

partner for Karl-Anthony Towns than Brandon Clarke. Towns has the ideal skill-set offensively that will take pressure off Clarke and allow him to roam in the high post or baseline, while Clarke offers the weak side rim protection and defensive nastiness you need to make up for KAT’s weaknesses in those areas at times.

Minnesota picks 11th in the draft and with how unpredictable draft night is, if a team that wanted him trades out or a team picking before Minnesota has someone unexpectedly drop to them Clarke could easily fall to 11 where he’d not only be a match made in heaven next to Towns, but he’d be a steal in general. Ultimately, I think Clarke is gone by 11, but in the event he is not I would strongly advise Minnesota to pick him and not look back.

Just to be clear, this won’t happen barring Memphis trading back or trading for another lottery pick. Morant seems to be a lock for them at number 2, but this is a fit that would’ve been potentially devastating on both ends of the court. Adding Clarke next to Jaren Jackson Jr. would’ve created one of the most complete, versatile frontcourts in recent memory. Jackson could space the floor with his three-point shooting ability while Clarke would lurk on the high-post giving Memphis optimal floor spacing. Defensively they would be a nightmare in today’s modern NBA with their switchability on the perimeter and elite-level rim protection. They would absolutely wreak havoc and bring back that defense-first “grit and grind” mentality to Memphis.

One avenue Memphis can explore to make this possible would be if they traded Mike Conley for another lottery pick and he winds up being available there. Then all the sudden they could trot out a core featuring Jaren Jackson Jr., Brandon Clarke and Ja Morant which would be one of the most exciting young trios in the entire NBA.

Phoenix holds the 6th pick in the draft, and it would not shock me at all if they took Clarke with their desire to compete now and their looming gap at the power forward position. Everyone talks about how the Suns need a point guard, but their need for a power forward is just as, if not more urgent for the team to fill this off-season given they literally do not have a single power forward under contract entering next season while they have Tyler Johsnon, De’Anthony Melton and Elie Okobo at point guard. Along with that, there are far more free agent point options than there are at power forward this summer. Clarke is a Phoenix native and grew up a Suns fan, which has led to many fans falling further in love with him as a prospect.

“I’ve been a Suns fan forever. It would be cool to be able to go back home. Maybe I can get a workout planned with them. If not, it’s not a huge deal, but I’d definitely like to get a workout with them and get a chance to play with them.” (via Duane Rankin of the Arizona Republic). Full article can be found on azcentral.

His ability to mask Ayton’s weaknesses defensively would be a major boost, as Ayton is solid on-ball, but his help-side defense and rim protection were issues his rookie year, so adding someone like Clarke that can protect the rim at an elite rate and excels in team-defense and rotating would bring some much needed stability to the defense. Surrounding Booker and Ayton with defenders like Mikal Bridges, De’Anthony Melton and Brandon Clarke is an ideal start towards building a defensive identity.

The Hawks have the 8th and 10th picks in this year’s draft and if Clarke is available when they are up to pick, he could be a perfect fit next to John Collins down low with Collins’ improved shooting ability from deep last season (though he still has a ways to go on that department). Along with that, having guys like Young and Huerter spacing the floor could give Clarke plenty of room to operate, floating around the high post and finding seams in the defense.

The Young/Collins combo have had some comparisons to a young Nash/Amare duo, and while they still have a long way to go to get there, adding a guy like Clarke could fill in as the Shawn Marion type role. I don’t think they are all that similar types of players except for the freakish second jumps they each possess, but in terms of doing the dirty work and playing exceptional defense he’d fit in nicely there as a super-role player.

Boston picks down at 14 to conclude the lottery and if Clarke is still on the board, I believe Danny Ainge snatches him up before the commissioner is done reading the name of the 13th pick. I personally don’t see him falling this low, but if he does I envision him absolutely thriving next to Al Horford who can space the floor and pass well, which would be a dangerous combination to pair with Clarke, given his ability to find openings in the defense through back-doors or high post drop downs. Clarke’s high-level IQ in Brad Stevens system would be a delight to watch. Boston holds the 14th, 20th, and 22nd picks in this draft so if they were to fall in love with him, they could always use their picks to move up and take him.

Boston’s roster is currently in limbo as we await the Kyrie Irving situation and if they are invested in pursuing Anthony Davis, but I believe Clarke fits with them no matter what their intentions are, as he would help with a rebuild while also offering as much “win-now” value as a rookie can in this class outside of Zion.

I believe he will be an instant contributor wherever he goes right off the bat.